Senior in the running for major art award 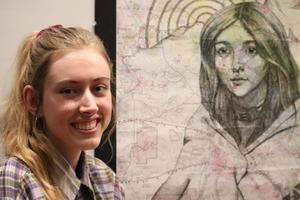 The work of Emma Sheets '19 was selected from more than 7,000 entries in a regional art and writing contest

Emma Sheets ’19 has been nominated for an American Visions Medal for her pen-and-ink drawing called “Tohono O’odham Nation.”

Emma's drawing -- a portrait of Native American woman drawn on a map that includes the U.S.-Mexico border -- is one five works of art nominated for the American Visions Medal in the Oregon Art Region's Scholastic Art & Writing Awards contest, which drew more than 7,000 art and writing entries this year.

Scholastic Awards honors work that demonstrates originality, technical skill, and the emergence of a personal voice or vision.

Emma said she created “Tohono O’odham Nation” after meeting members of the tribe while on a La Salle immersion trip to the U.S./Mexican border.

"I was inspired to create a piece of art giving these people a voice when they have been struggling to be recognized at all," said Emma in the statement she submitted with her drawing.

Emma used a map of the border area in her work "to highlight the importance of the land and what it means to their history," she said. She also included text about the tribe to emphasize "the unique and beautiful history of these people and how important it is to give them proper protection and representation."

" I am always so proud of my art students whose work is based in social justice and made with heart and high technical skill," said art teacher Cha Asokan. "Emma is a perfect example of an artist using her voice to bring thought to a well-deserved and important issue."

A panel of jurors in New York City will select one writer and one artist from each region to receive a medal. Medalists will be announced on the Scholastic website in March.