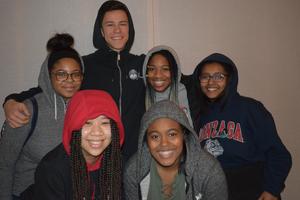 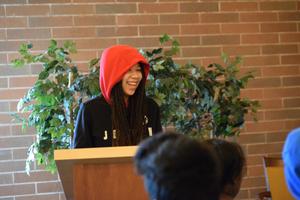 Observances include music, a chapel day, and buttons spotlighting leaders
Led by the Black Student Union, Lasallians observed Black History Month several ways in February.
Black History Month Theme Days included Racial Justice Day when many Lasallians wore hoodies with the hoods up to remember 17-year-old Trayvon Martin, the black teenager who was wearing a hoodie when he was fatally shot in 2012 in Florida.
"We also wear hoodies to spread the message that Black Lives will always matter," said Amira Tripp-Folsom '20, president of the BSU. "Hoodies are not an excuse to criminalize or murder any individual."
The observances also included Chapel Day, during which students spoke about hurtful words, and Black Excellence Day, during which students and staff wore symbols such as buttons, stickers, or shirts to pay homage to black people they admire.
In addition, the BSU broadcast music by several black artists -- such as Michael Jackson and Aretha Franklin -- in the cafeteria during lunch breaks.
"We want to celebrate black history," said Amira. "We want to celebrate black excellence and acknowledge that black history is something that should be celebrated throughout the year, not just the 28 days of February."
Published February 28, 2019 Print