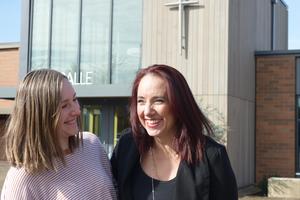 La Salle alum and parent Debbie Stuckey Carter ‘90 has been selected as La Salle’s Volunteer of the Year.

Carter, the mother of Kalei Carter ‘20 and Brittany Carter ’17, has volunteered for La Salle for several years. She has prepared meals for athletic events, chaired the Yulefest committee, and she currently serves on the Alumni Board.

“Debbie is an unending bank of brilliant and creative ideas, works very hard, and is willing to do whatever it takes and spend as much time as it takes to get the job done,” said Melanie McCaffrey ‘95, La Salle’s volunteer coordinator. “She makes everyone around her enjoy themselves with her fun and vibrant personality and she makes everything seem less like work. We are truly blessed to have Debbie as a part of this La Salle community!”

Debbie represents the hundreds of relatives, friends, and alumni who sold game tickets, organized dinners, judged speeches, made sandwiches, painted theater sets, decorated hallways, barbecued burgers, or volunteered some other way for La Salle during the past year.

The following individuals also were nominated for their outstanding volunteer work in the past year: