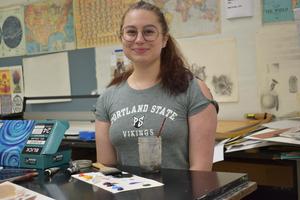 Carolina Stahly-Dronkowski '19, Ana Marie Martinez ’19, and Ryan Fahlman-Katler ’19 earned the honors for the artwork they entered in the national contest, which recognizes “the vision, ingenuity, and talent of our nation’s youth.” Fewer than 1 percent of the 340,000 student entries earned these honors in this year's contest.

Ryan won a gold medal for a linoleum block print called “Empty Space” and a silver medal for a photograph called “Still Life.”

More than 100 art jurors, such as curators, gallerists, artists, filmmakers, video game designers, and educators, evaluated the entries for originality, technical skill, and the emergence of a personal voice or vision.

Jurors awarded gold to “the most outstanding works in the nation,” and silver to “works demonstrating high honors on the national level.”

The three Lasallians have been invited to receive their awards during a ceremony at Carnegie Hall in New York City on June 6.

The Carnegie Hall ceremony will be one of several events for winners in the Scholastic contest, which drew entries in 29 art and writing categories this year.

While in New York City, winners will be invited to a Maker Prom, which will feature dancing and creative activities. Some will see their work displayed at The New School and Pratt Institute’s Pratt Manhattan Gallery.