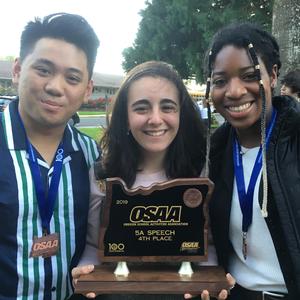 Students place high for poetry, informative speaking, after-dinner speaking, and Lincoln-Douglas
La Salle Prep earned 4th place in the state at the 2019 OnPoint Credit Union OSAA Speech & Debate Championships. The recognition was earned by all team competitors who advanced to the second day of competition in their respective fields. These students include:  The following five Lasallians also competed at state. Noted in parentheses is the highest ranking each received by judges in a given round.
Published May 2, 2019 Print