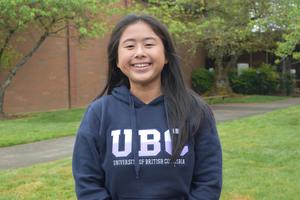 Jaden Lee ’19 has been awarded the Bronze-level Graduating Seniors Award from U.S. Figure Skating, the governing body for figure skating in the United States.

The Graduating Seniors Program recognizes student-athletes who have pursued figure skating while excelling in school.

A member of the National Honor Society, Jaden skates two hours a day, five to six times a week, getting on the ice as early as 5 am when practice lands on schooldays.

“I love the sport,” she said. “I look forward to going to the rink every morning.”

Jaden has skated freestyle for six years, and dance for one.

She said she finds skating a good stress reliever that “gives me a sense of freedom.”

“The only thing I’m working toward is my own goals,” she said. “I don’t have to follow something else.”

In addition to skating, Jaden is active in several school groups, such as La Salle chapter of the National Honor Society, the Outdoor Club, and the Service Club.

Jaden plans to continue to skate when she attends college at the University of British Columbia later this year.

Not only is UBC a great school for her to prepare to be a dentist or a radiologist; there are three ice skating rinks on campus.