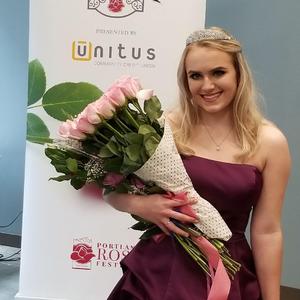 The parade will be the culmination of Olivia's reign as the East Metro princess on the Rose Festival Court. Since earning her crown, she has been volunteering, touring the state, visiting the elderly and nonprofits that serve the community. She's seen different sides to the Rose City while dining at the Pittock Mansion, delivering roses to the VA hospital, touring Portland's underground, and waving from the court's float in the PGE/SOLVE Starlight Parade.

As a princess, Olivia is automatically a contender to be the Rose Festival's queen for the coming year.

The queen, who will represent Portland and the Rose Festival at appearances throughout the country and abroad, will be named during a ceremony at 8:30 am Saturday at Memorial Coliseum. She will be selected based on leadership, scholastic achievement, school activities, civic involvement, volunteer projects, communication skills, and overall impression.

If you won't be at La Salle's commencement, come wave to Olivia during the parade or see her and the entire Rose Festival Court at the coronation. Olivia herself hopes to finish the parade in time to cross the stage to get her diploma.
Published June 7, 2019 Print