Every La Salle teacher returns for another year 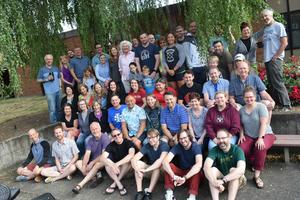 Teachers stay because of the mission, the camaraderie, and, of course, the students

As students stream into La Salle to start the 2019-20 school year, they're finding fresh art supplies, a renovated main hallway, and a new course in marine biology.

But they aren't finding any new teachers; all 50 of last year’s classroom teachers are returning to La Salle this year.

“The students!” says counselor and psychology teacher Kerri Kelvin, explaining why she’s coming back to La Salle for the 22nd time. “I feel so lucky to work in a school community that I love returning to every school year.”

Science teacher Amanda Schieber said the teaching staff is one of the main reasons she’s returning.

“I genuinely like and respect my co-workers here, and we have some great kids,” said Schieber, who is returning for her seventh year at La Salle. “I want to remain a part of this community.”

Math teacher Larry Swanson has been part of the La Salle community for six of the 40 years he's been teaching.

"Have you ever been to a workshop or read a book and the idea just consolidates all your disparate beliefs or practices into one cohesive manifesto?” he asked. "La Salle the school and the person do that for me. What we do here makes me able to truly be myself and gives me the language to articulate myself."

A 100 percent teacher return rate is rare for any school.

Though the rate of turnover among the approximately 150,000 teachers in U.S. Catholic schools is unavailable, according to the National Catholic Educational Association, the profession has battled turnover for decades. Studies say that educators, in general, leave their classrooms for a myriad of reasons, such as moving, retirement, parenthood, lack of support, or a new career.

The benefits of having an experienced staff are many, said Alanna O’Brien, La Salle’s Vice Principal of Curriculum and Professional Development. Instead of spending time showing the ropes to new teachers, the entire teaching staff can dive right into the deep end of pedagogy.

“There’s no re-start,” said O’Brien. “It’s going to allow us in our professional development to go for more depth. We are excited at how that will impact student learning.”

A competent, consistent staff also can give students a sense of stability that can help give them the confidence to succeed.

That is just what St. John Baptist de La Salle, founder of the movement behind La Salle Prep, said he wanted for young people when he started what would become the worldwide Lasallian network of schools more than 300 years ago.

“To touch the hearts of your students,” he told his fellow teachers, “is the greatest miracle you can perform.”

"I cannot imagine teaching anywhere else."