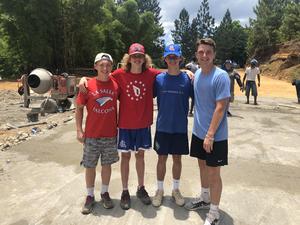 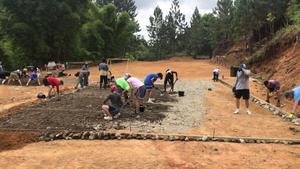 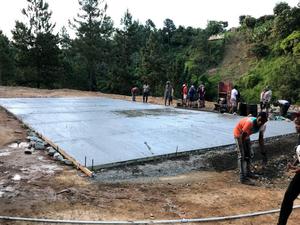 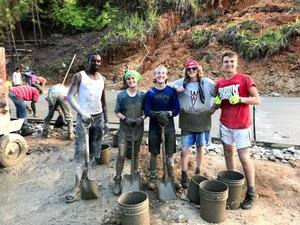 The community, said one student, showed him how to enjoy the "simplest things"

By day he hauled cement, shoveled gravel, and leveled rocks. At night he slept on a foam pad on the floor.

Still, Jake Owens ’21 said he had the time of his life this summer.

“It” was flying to Jamaica in July with fellow Lasallians Bradley Kiltow '21, Will Rakoz '21, and Ian Simmons '21, on a service trip coordinated by the nonprofit Courts for Kids. Once there, the boys spent 10 days working with locals and students from other Northwest schools to build a concrete sport court in the Jamaican village of Woodford.

The journey was a long time in the making. Each of the boys raised more than $2,000 to pay not only for their travel, trip, food, and accommodations but also some of the supplies used to build the court.

The job of building a concrete sport court by hand was hard enough, but the task became more difficult along the way. A tractor broke down, a fuel line broke, and there was even a landslide.

But the boys eagerly pitched in, hauling, lifting, carrying and doing whatever needed to be done to build the court.

“These boys were awesome and were great ambassadors of La Salle,” said Selene Nesland, who co-founded Courts for Kids with her husband, former Portland State University basketball player Derek Nesland, in 2006. “They worked hard, they asked a lot of questions of the culture, they were outstanding.”

The La Salle students got to know the Jamaican residents by working alongside them. They also visited a nearby school. In their free time, the Falcons - who left their phones at home for the duration of the trip - played cards and volleyball with the children.

“I learned from the community to find ways to enjoy even the simplest things,” said Ian. “Even when you don’t have much.”

LEARN MORE ABOUT THE TRIP