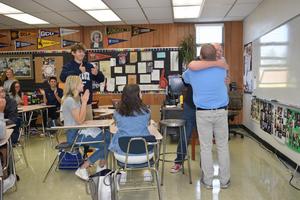 Colleagues praise the math teacher for encouraging both students and fellow teachers
Veteran math teacher Larry Swanson has been voted by his colleagues as the 2019 Lasallian Educator of the Year.
"Larry cares so much for his students, and they see it and feel it," wrote one of several colleagues who nominated Swanson for the honor. "His door is always open to offer math help and life help."
"Larry is the epitome of a Lasallian educator," wrote another nominator. "He is gentle and patient in supporting students through challenging and demanding work."
The Lasallian Educator of the Year Award is bestowed annually to an educator who exemplifies the spiritual and pedagogical ideals of St. John Baptist de La Salle in the 21st century. Each year La Salle’s staff chooses one among themselves to receive the award.
Swanson is in his sixth year teaching at La Salle, and his 40th year teaching. Prior to coming at La Salle, he worked in public schools.
Just before the 2019-20 school year started Swanson described his fondness for La Salle Prep and De La Salle himself.
"Have you ever been to a workshop or read a book and the idea just consolidates all your disparate beliefs or practices into one cohesive manifesto?” he asked. "La Salle the school and the person do that for me. What we do here makes me able to truly be myself and gives me the language to articulate myself."
In their nominations, staffers praised Swanson for not only helping students, but also for helping them grow as professionals.
"Larry has challenged me to be my best," wrote a nominator. "As a colleague, he has been encouraging and supportive. He demands excellence from others by being the example, and demanding it of himself."
Swanson will receive his award during the schoolwide Heroic Vow Assembly on Wednesday, Nov. 13.
“I love that we take the time to recognize this excellence in our educators,” said president and principal Andrew Kuffner, himself the 2012 Lasallian Educator of the Year. The honor, he said, links the winners “to the values we aspire to represent and live.”
Published September 6, 2019 Print