Falcon football will be broadcast on Mater Dei radio 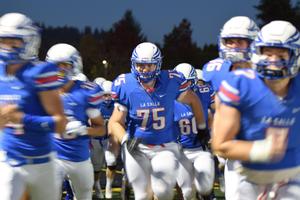 The broadcast will feature coaches' interviews during a 6:50 pm pre-game show and a 7 pm kickoff.

"We carried the Central-Jesuit game last year and it went really well, so this year we decided we would carry all the schools," said Pat Ryan, Mater Dei's executive director.

Ryan, a former on-air broadcaster, will give a play-by-play account of the game, while former college football player (and former Blanchet House executive director) Greg Baker will comment on the game.

The game will be streamed live on www.materdeiradio.com In addition, a recording of the game will be posted on Touchmark's High School Game of the Week page.