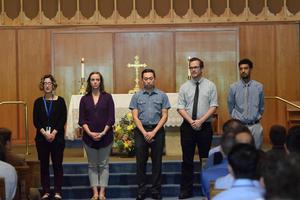 During La Salle's first Mass of the 2019-20 school year, students and staff welcomed several new people who joined the school within the past year.

As they stood in front of everyone assembled for Mass at Christ the King Catholic Church Wednesday afternoon, the new staffers were asked if they would take the Lasallian Heroic Vow, a pledge to recognize God’s presence and serve as role models and big brothers and sisters to students.

After each newcomer promised "I will," President/Principal Andrew Kuffner and Executive Director Matthew Winningham gave each one a medal of St. John Baptist de La Salle.

"La Salle very intentionally called the first teachers brothers, so we continue that tradition of viewing our entire staff as brothers and sisters," said Kuffner. "Each person involved in this work is central to the fulfillment of the mission."
The new Lasallians who took the oath include:
“I’m so grateful each of these people said “yes” to join this amazing staff," said Kuffner. " I look forward to witnessing the unique gifts they will share with this community.”
Published September 11, 2019 Print