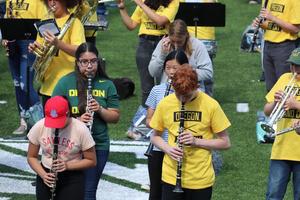 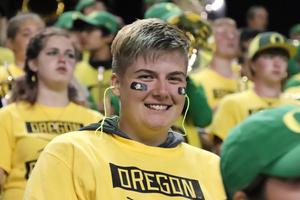 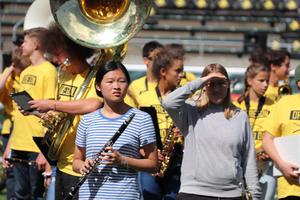 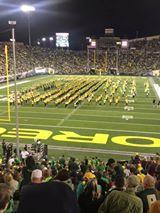 See the Falcons perform at :31-1:35 mark of halftime show in Autzen Stadium

“This is a great opportunity for (students from) smaller schools that might not ever get a chance to march in a stadium,” said Anna Frazer, Administrative Coordinator of Athletic Bands, said of the university’s first Oregon Band Day.

The musicians all took to the field a few hours before the game. In addition to rehearsing music, they practiced dancing along to the music.

Dancing while playing songs such as "Ease on Down the Road," was challenging but fun, said the students.

“I really really enjoyed the experience,” said clarinetist Aylin Begines ’20. “It was honestly a once-in-a lifetime opportunity…Never would I have imagined that I would play in the marching band for the first game of the Oregon Ducks.”

"It really helped me understand how much effort is put into even fun things like pep games," she said.

The trip to UO, said clarinetist Gili Kaptur-DeJesus '20, prompted her to think about her future.

"It also helps give us seniors an idea on how marching bands work especially if we want to continue playing music in college," she said. "I believe it helped us see the next step in our lives and in our music careers."

The other La Salle musicians who performed Saturday are: