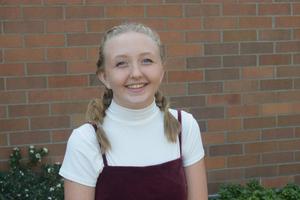 Of the more than 1.5 million juniors who took the standardized test, fewer than one percent earned high enough PSAT/NMSQT Selection Index scores -- calculated by doubling the sum of the Reading, Writing, and Language, and Math Test scores -- to earn semifinalist status.

To advance to the finalist level, where she can continue to compete for more than $31 million worth of scholarships, Franny must submit records of her academics, service work, activities, leadership, employment, and awards.

She will have plenty to show. Franny has an unweighted grade point average of 4.0, and her weighted average is likely nearly half a point higher, given that she takes some of the most advanced classes La Salle offers, such as AP Chemistry, AP English IV, and AP Calculus.

Franny’s resume also includes working backstage on La Salle Theater productions, competing on the Speech and Debate team, playing piano and accordion, and volunteering with a nonprofit that provides medical care to the homeless.

Franny said she didn’t do anything special to prepare for the PSAT; she just worked hard in school.