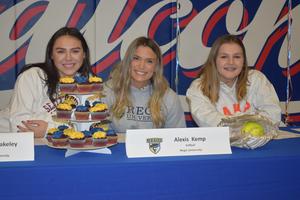 Jacqueline Blakely ’20, Alexis Kemp ‘20, and Nina Timmen ‘20 up their games
Three Falcons announced their plans to play collegiate sports today, the first day that National Letters of Intent may be signed for many sports.
During an after-school ceremony in the Brick Oven, Jacqueline Blakely ’20 signed a Letter of Intent to play soccer for Seattle Pacific University in Washington, Alexis Kemp ‘20 signed a Letter of Intent to play softball at Regis University in Colorado, and Nina Timmen ‘20 signed a Letter of Commitment to play volleyball at Baker University in Kansas.
“Anytime somebody at the next level recognizes and rewards a person with an invitation to come and join their program and school, it’s a big deal,” said Athletic Director Chris George ’97. “Especially when you reflect on the amount of energy, effort, and emotion it takes to develop yourself as a student-athlete. It’s validation."
Published November 13, 2019 Print