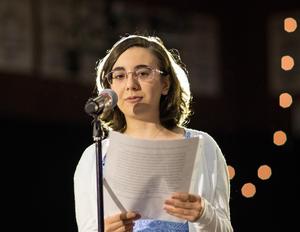 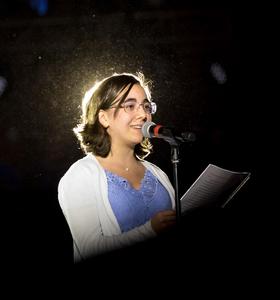 The award recognizes students who have completed at least five semesters of high school; earned the degree of Superior Distinction in the association's honor society, demonstrated outstanding character and leadership, and earned a GPA of at least 3.7.

The honor is distinct; fewer than 1 percent of the more than 140,000 student members of the National Speech & Debate Association earn the Academic All-American award each year.
Social Studies teacher Michael Doran, who nominated Grace for the award, described her as an "exemplary student" and  La Salle's most accomplished competitor in the nine-year history of the Falcon speech and debate team.

Grace has participated in the Oregon OSAA State Speech and Debate Tournament for three consecutive years and has earned the prestigious Wilma Hicks Award, which recognizes the top overall competitor who is competing in three events at the local district tournament.

In addition to earning several first, second, and third place awards while on the team, Grace is also loyal to the team, said Doran.
During her forensics career, Grade has delivered a range of speeches, from informative ones on Alzheimer's disease to persuasive ones on social media. She's also given impromptu talks about Gandhi and Mother Teresa.
Grace, who wants to pursue a career in international law, said that participating in speech and debate has given her confidence.
"It's comforting to have the power to move people, to change minds, to make a difference," she said.
A powerful speech, she said, can make "a global difference."
Published January 17, 2020 Print