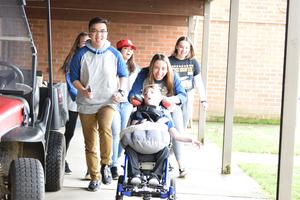 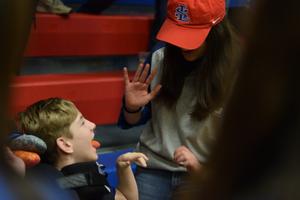 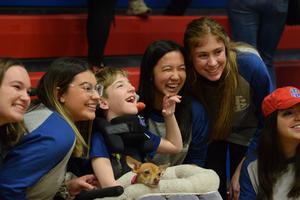 Lasallians will do service to raise funds for boy's medical equipment

With cheers, smiles, and even a giant wave, Lasallians have pledged to help 8-year-old Taran Dodge.

The student body met the Portland boy during an assembly in the gym on Jan. 24. Sparrow Clubs USA, a nonprofit that matches children in medical crisis with schools, paired Taran with La Salle.

Taran, who was born with his intestines outside of his body, faces many challenges including dystonic cerebral palsy. He cannot hold his head up, use his hands, or walk. His vision is impaired and he doesn’t speak. He needs round-the-clock care.

Despite his challenges, Taran is upbeat, said his mother, Kelsey Smith. He loves music, books, other kids, and his lapdog, “Fanny Pack.” He also loves it when he is raced around in his wheelchair.

Through the Sparrow Club, La Salle students will raise money for Taran by helping others. For every hour of service, sponsors Black Rock Coffee and Steele Group Inc. will give $10 for the boy’s medical expenses, up to $2,560.

La Salle Director of Service Sarah Maher said that the Sparrow program is teaching students how to see dignity in others.

“Life and dignity of the human person is the root of all Catholic schools and that dignity lies each person,” she said. “Taran being nonverbal and wheelchair-bound doesn’t replace the dignity he deserves.”

The students will do more than just raise money for Taran. They have invited him to several school events, such as basketball games and the Sadie Hawkins dance.

Dakota Canzano '21 said that working for Taran will get students to “see through their hearts.”

“As teens in high school we are quick to judge,” she said. “This will open people’s eyes.”