Two teachers to be feted on Friday 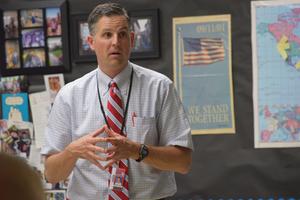 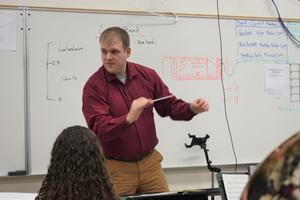 Mr. Donnelly and Mr. Doran will receive the Carol Feltz Bluhm Award for their commitment to student activities

Lasallian educators Michael Doran and John Donnelly will each receive the fifth annual Carol Feltz Bluhm Award on Friday, Feb. 14, during halftime of the varsity girls basketball game vs. Wilsonville in the Brick Oven. The game will start at 7:15 pm.

The award, named for a 1980 La Salle graduate who died of cancer in 2014, recognizes teachers who exemplify "the qualities and characteristics of Lasallian education" by coaching or moderating a sport or activity sanctioned by the Oregon School Activities Association.

Mr. Donnelly has been a music teacher for a decade, the last five and a half at La Salle. In addition to serving as the Falcons’ band director, he teaches yearbook class and directs the pep band.

Donnelly said that he tries to build leaders throughout the ensemble.

“In order for us to be successful, the group requires focus, attention to detail, motivation, drive, organization, and passion,” he said. “Every member of our group is an integral part of who we are as a band, and I strive to make sure students understand their place, not just within the literature but also where they belong at our school.”

He encourages his students to create a "habit" of excellence.

“Excellence comes from acknowledging your mistakes, fixing them, and practicing until you cannot get your part wrong,” he says. “We embrace mistakes in our classroom for the sake of learning.”

Michael Doran – who received the first Carol Feltz Bluhm Award in 2016 – has taught at La Salle for 15 years and has served as a principal at Milwaukie’s Christ the King Catholic School for four years. In addition to teaching social studies and coaching the speech and debate team, he has coached a quiz bowl team.

Mr. Doran regards those he teaches as “gifts from God.”

“Students are unique gifts from God who have their own unique talents and skills to share with others,” he says. “I try to help students realize their own abilities in themselves to, in turn, positively impact/serve others.”

Both Doran and Donnelly demonstrate the commitment to students that Feltz Bluhm – a basketball star, yearbook editor, and student leader during her years at La Salle – "wanted to make sure we recognized" forever, said Andrea Burns '97, Vice President of Foundation & Major Gifts.

Carol's husband, Jim Bluhm, noted that coaches and moderators spend "hours and hours" leading practices, planning, and traveling to events so students can pursue their passions.

"She knew it could be a pretty thankless job..." he said in a 2016 statement announcing the award. "But the impact the coaches have on the lives of their students and athletes is great. It definitely was for Carol."

Both of this year's recipients expressed gratitude for the recognition.