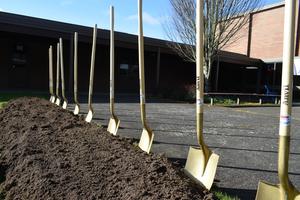 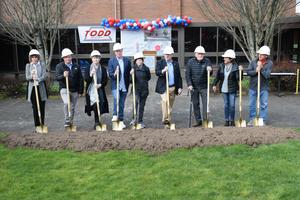 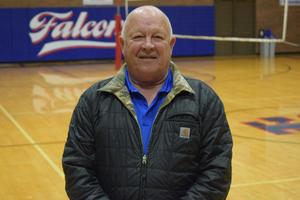 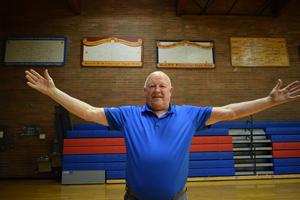 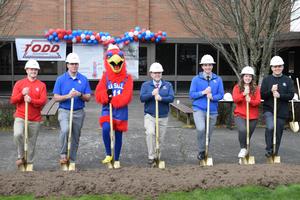 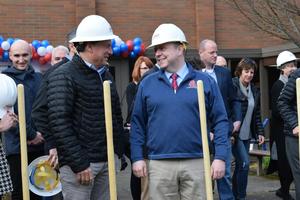 The Saalfeld Athletic Center will open in stages starting this fall
La Salle leaders, supporters, and students broke ground on the $5 million Saalfeld Athletic Center on March 3.
The new center will consist of a renovation and expansion of the gym known as the "Brick Oven," and feature new locker rooms, public restrooms, and offices, as well as a new common area, fitness center, hardwood gym floor, and more.
As he stood in the courtyard that will be enclosed and incorporated into the center, Executive Director/CFO Matthew Winningham described the project as “a complete reboot” and "a remodel 53 years in the making.”
"These improvements will better serve all students by enhancing La Salle’s health and PE programs, providing clean and safe locker room environments, and improving the training room and fitness center experience," he said. "We are excited to see this vision come to life.  We can hardly wait to watch our students and community embrace the new space while we all wonder what life was like before the Saalfeld Athletic Center."
The center, designed by Studio Petretti Architecture, will be built by Todd Construction and completed in phases starting this fall.
The center will be named for the late Father Lawrence Saalfeld, a longtime Falcon friend and supporter. It was the $1.25 million gift in his memory from the late Elsie Franz Finley that got the ball rolling on the project, said Winningham.
"Elsie's gift gave us the courage to dream big," he said.
The new gym floor will be named after Jack Cleghorn, the legendary coach who led the Falcons to four state titles in the 1980s.
President/Principal Andrew Kuffner started the ceremony by praying for the brothers, sisters, and community who started La Salle, for the school's many supporters, and for "all those who made this day possible," including those who shepherded the school's other renovations and additions over the years.
"And finally," he said, "We ask for blessings on the many generations of students, teachers, coaches, parents and Falcon fans to come. Invisible to us now, but who will benefit from this athletic center and bring the best out in them so that they can bring glory to God."