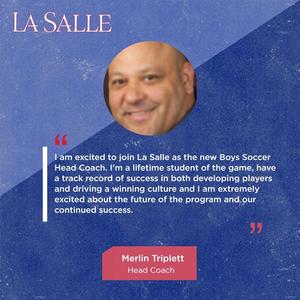 Merlin Triplett will lead the reigning state 5A champions

La Salle has hired Merlin Triplett as head coach of La Salle's boys soccer program. During the last five years, Triplett has served as a junior varsity coach in Central Catholic’s boys and girls programs. He also coached for the Eastside Timbers club program for a decade.

"I am excited to join La Salle as the news boys soccer head coach," said Triplett. "I'm a lifetime student of the game, have a track record of success in both developing players and driving a winning culture, and I am extremely excited about the future of the program and our continued success."

Triplett will replace Seth Altshuler, who coached the Falcons to the 5A state championship last year.