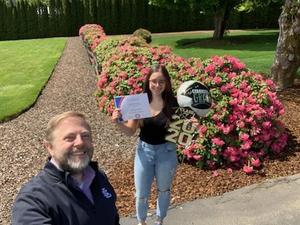 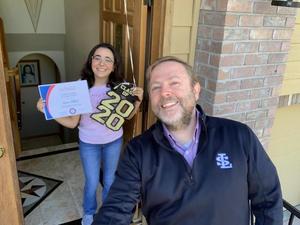 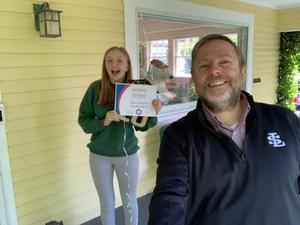 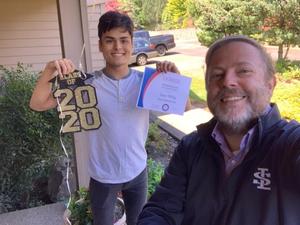 Franny Bengtson, Grace Elkhal, Ashley Smith named valedictorians; Lucas Wobig named salutatorian
Franny Bengtson, Grace Elkhal, and Ashley Smith have been named the valedictorians of the Class of 2020. Lucas Wobig has been named the 2020 class salutatorian.
The four seniors heard the good news from President/Principal Andrew Kuffner when he appeared at their front doors on May 6. Because La Salle's campus is closed due to the pandemic, Kuffner had driven to their homes to notify and congratulate each with a certificate, a balloon, and a glittery "Class of 2020" sign.
"When there are reasons to celebrate, let's celebrate," he said.
Valedictorian and salutatorian honors are awarded every year to the seniors who have demonstrated the highest academic achievement in their class.
According to La Salle's handbook, the administrative team, in consultation with the Academic Council, selects the valedictorians and salutatorians, giving primary consideration to cumulative weighted grade point average after seven semesters. Other considerations include course load, grades, and academic factors including, but not limited to, the overall academic record of grades and credits, and the level of rigor in a student's program of studies
Typically, valedictorians are invited to speak at Commencement and salutatorians are invited to speak at Baccalaureate.
Published May 6, 2020 Print