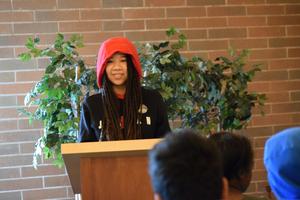 Amira Tripp-Folsom is one of only 29 students honored nationwide for outstanding work in race relations
Amira Tripp Folsom has won the 2020 Princeton Prize in Race Relations. She is one of 29 students nationwide to receive the honor.

The Princeton Prize in Race Relations recognizes and rewards high school students who, through their volunteer activities, have undertaken significant efforts to advance racial equity and understanding in their schools or communities.

Amira is a gun violence prevention activist and a leader of the organization Re-Innovate Evolve Prevent. REP, a program of the nonprofit Next Up, which focuses on creating young leaders and increasing civic engagement in diverse communities, uses community engagement as a means to highlight the intersection between racial inequities and gun violence.

In addition, Amira is a founder and president of La Salle's Black Student Union and is dedicated to advancing racial equity for those who come after her.

Amira has had a "transformative presence" on the La Salle community, said Brian Devine, vice principal of Student Life.

"Since the day she began at La Salle, Amira has been a strong champion for racial equity at our school," he said. "Through her passion and commitment to racial equity, Amira has challenged our students, our teachers and our school leaders to develop a more equitable and racially diverse climate for all students at La Salle."