Persevering through the pandemic 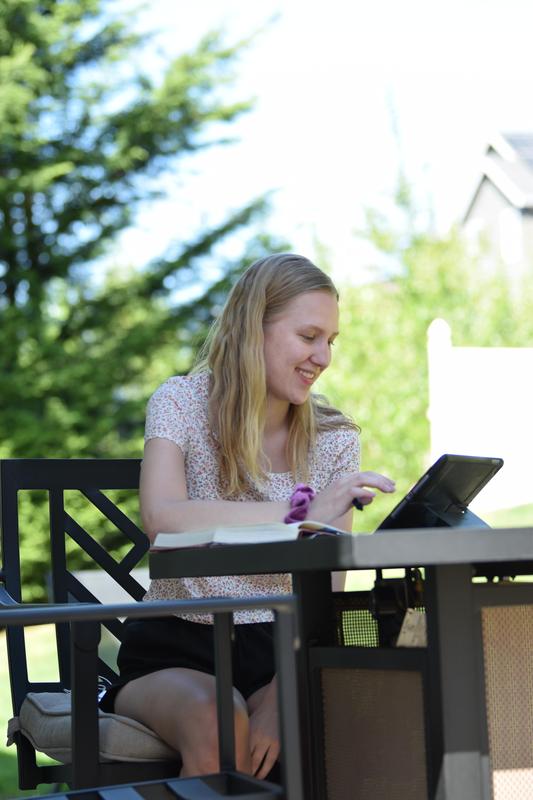 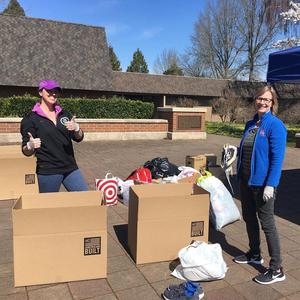 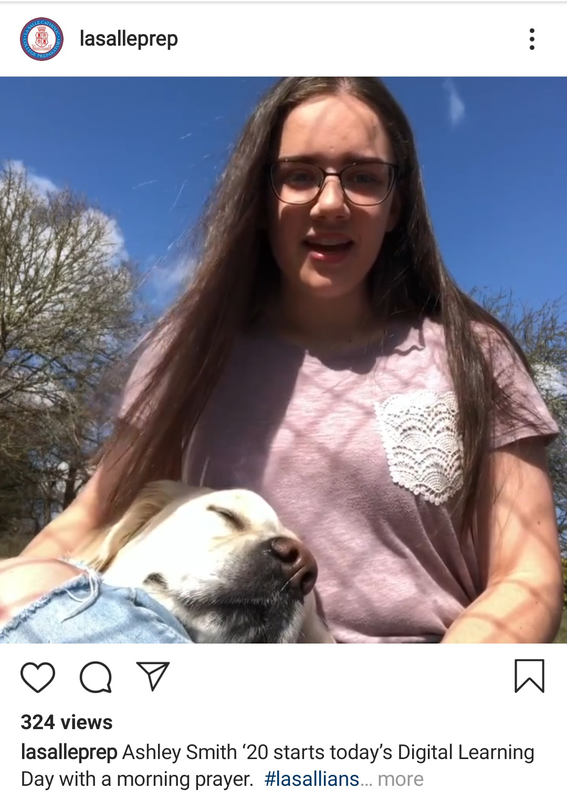 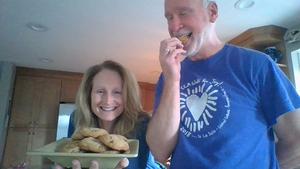 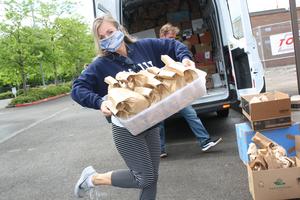 The Class of 2020 heaved a collective sigh. La Salle’s campus had closed for the rest of the school year because the state shuttered all schools to stem the spread of COVID-19. Like thousands of 12th-graders across Oregon, they saw nearly every senior tradition start to fade away; no senior presentation in the gym, no extravagant spring prom, no grand graduation ceremony packed with teary-eyed loved ones. The teenagers had been on the brink of some of the best times of their lives; now, they might not even get to hug each other goodbye.

Then, they logged on to their computers. Math teacher Larry Swanson had written words of encouragement to one student. Social studies teacher Alex Lanaghan had shared photos of his family in an online forum. English teacher Paul Dreisbach had sent all 60 of his AP seniors a video in which he commiserated about the unexpected changes in the world.

“I think it’s totally appropriate for you to be shocked, to be upset, to be angry,” he said. “I don’t have words of wisdom for you at this point, other than to say I think we just have to feel all the feelings, and keep pushing.”

La Salle Prep students and staff might not be together during the last few months of the 2019-20 school year. But through messages, videos, prayers, service, screencasts, phone calls — and yes, schoolwork — they are staying connected.  La Salle’s Falcons were flying high in early March. The girls varsity basketball team had fought its way to the semifinals of the state 5A tournament. The student body had raised more than $75,000 to help classmates pay tuition. And the entire community rallied to help a local boy named Taran whose illnesses left him unable to walk or talk.

At the same time, alarming news reached campus from the other side of the world. COVID-19 — a virus that had taken lives thousands of miles away — had arrived in the U.S., killing Americans, ravaging the stock market, suspending sporting events, and closing businesses. Officials declared it a pandemic. After noticing how worried students were about the outbreak, science teacher Carie Coleman scrapped her lesson plans so she could talk with them about what was going on. She told them what she knew, then reassured them it was OK not to know all the answers.

“The big thing is to be kind and forgiving of everything because there are so many things that are going to happen that aren't expected,” she told them. “Be forgiving of yourself, for what’s going on in the world.”

Anticipating the shutdown might last for months, a handful of seniors staged a mock graduation in the courtyard on what turned out to be their final day on campus. About half the class showed up to receive the fake diplomas; using a trash can as a podium, one “graduate” delivered an impromptu speech.

A few days after La Salle closed its campus, it moved its classes online. While counselors and administrators made sure every student had access to the internet — and helped them get it if they didn’t — teachers prepared to instruct via digital channels. Several Spanish teachers recorded their voices over slides, then asked students to submit videos of themselves speaking in response to a prompt. Kerri Kelvin’s psychology students, who were studying the brain and neuroscience, built models of neurons out of objects they found in their yards. Art teacher Cha Asokan instructed students to go outside and draw.

“My philosophy is to keep them looking, and thinking, and creating visually,” she said. Religious studies teacher Tom “Mr. Mac” McLaughlin uploaded to YouTube a World Religions lesson during which he asks students to reflect on the concepts of Hinduism while preparing food. Instead of cooking as a class in a kitchen at school, Mr. Mac had students cook at home while they watched a video of Mr. Mac and his wife, Rebecca, baking cookies at their house.

Performing arts teachers got creative, too. Drama teacher Michael Shelton had students focus on writing and rehearsing monologues. Students performed two-person scenes via Zoom.  Choir and guitar teacher Otto Wild shared different kinds of music with students. One lesson? Watching a video performance of Smetana’s “The Moldau,” then writing a reaction to the piece.

Teachers noticed a few upsides to digital learning. More students could fit in an online chat room than a brick-and-mortar classroom, leading to a greater diversity of opinions. Students who didn’t speak up in class seemed to share more online. And oftentimes, digital discussions went deeper than in-class conversations because students had to put their arguments in writing.

Still, students and teachers missed one another. “I miss seeing my friends every day and getting to know my teachers,” said Hattie Kirby '20.

“I feel like we are doing all the work without any of the fun,” said religious studies teacher Ryan Darmody.

So, while instructing, teachers tried to develop a classroom culture online. They had students share their thoughts in screencasts. They met via Zoom, sometimes just to ask “How are you?” A few shared scripture. Alex Lanaghan posted hashtags from "The Tonight Show": #Myquarantinein6words, #IknewIhadcabinfeverwhen.

“The fun part is being together, sharing inside jokes in Period 3 that nobody else understands, or checking in on athletes the day after a game, or performers the day after a performance,” said Darmody. “We miss our students.”

To keep the community together while apart, La Salle staffers and student leaders orchestrated a variety of activities. The Student Life Team created a March Madness-like bracket pitting candy against musicians, and movies against places to get food or drink. (The Final Four: Harry Styles vs. Reese’s Peanut Butter Cups and Chick-fil-A vs. “Ratatouille.”)

“High school is about more than just academics, and we know that our students have been stripped of several faith, service and community activities that were scheduled to happen this spring,” said Director of Community Liz Banta '00. “Hopefully we can bring a little joy and excitement during a difficult time.”

Director of Faith Gary Hortsch arranged for Lasallian Ministry students to write and lead morning prayers via Instagram and Facebook. The Student Council created a video leading viewers through the Stations of the Cross. Students and their families also volunteered during the outbreak, adding their names to the National Bone Marrow Registry. delivering food to the hungry, and collecting clothes for the homeless. A food drive for Blanchet House brought in more than 15,000 lunches for the hungry.

“My philosophy is just to simply be connected to each other through our concern for the less fortunate,” said Director of Service Sarah Maher. “Count our blessings and do what we can to help those without as much as we have.”

The community’s heart continued beating in other ways. Staffers called every La Salle household to see how students were doing and if families needed extra support. Counselors reached out to students about virtual college tours, and changes in this year’s AP exams, and ACT and SAT schedules. They launched a “wellness page” on the school website, where they suggested ways to relieve stress while quarantined at home.

The Athletic Department posted profiles of athletes, and Instagram lit up with senior portraits and photos of actors rehearsing for the spring musical, "Les Misérables," before campus closed. President/ Principal Andrew Kuffner shared video updates of Saalfeld Athletic Center construction, and the Admissions team posted photos of staffers holding one-word signs that collectively said “we love you and miss you and can’t wait to be together again.”

Meanwhile, school administrators assured the members of the Class of 2020 that, though they couldn’t enjoy the traditional lineup of second-semester celebrations, their class would be honored in innovative ways.

Students said the images and messages from teachers, staffers, coaches, and one other boosted their spirits as they studied at home and waited for the shelter-in-place order to lift. Knowing they weren’t alone, students said, helped them handle the uncertainty, and reminded them of why they love their school community.

“It’s like leaving your family and missing it,” said Grace Elkhal '20. “And realizing what an amazing family you had the entire time.”