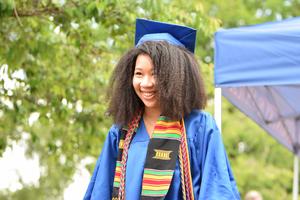 Amira Tripp Folsom '20 is recognized for academic excellence, leadership, and race relations work
La Salle Prep graduate Amira Tripp Folsom '20 is one of only 32 students in North America selected as one of the Jordan Brand’s Wings Scholars this year.
The prestigious Wings award “tries to level the playing field” for students of color through education, mentorship, and access.
"These students represent the promise, potential and optimism of the future," said Jordan Brand President Craig Williams in announcing this year's inductees into the Wings family. "We refuse to be limited. We choose to believe in greatness and the potential impact of the next generation."
The Wings award is one of several national, regional, and school honors Amira has earned this year. This spring, she won a Princeton Prize in Race Relations, which recognizes and rewards high schoolers who have undertaken significant efforts to advance racial equity and understanding in their schools or communities.
At La Salle’s graduation, Amira learned she was chosen by fellow seniors to receive the 2020 Michael Gloden Award - named for a La Salle student killed in a 1972 car accident - for her integrity, character, citizenship, and service to her class.
Amira also was selected for the Frederick Douglass Distinguished Scholars program at American University in Washington, D.C. The four-year merit scholarship - which covers tuition, housing, meal plan, books, mandatory fees, and public transportation - is awarded annually to five “ambitious, introspective, and optimistic” first-year student leaders committed to “multidimensional excellence.”
“I feel just really lucky and blessed that paying to go college won't be a burden or a concern,” said Amira.
The Jordan Brand scholarship will give Amira a range of opportunities. Among them: One-on-one mentoring, and a chance to chance to intern with the Jordan Brand.
“It's not just about the money,” said Amira. “It’s about the many doors that scholarship can open for you.”
Amira worked hard at La Salle, excelling as a student and a leader.
She also became a voice for students of color. She and another student launched a diversity committee that laid the groundwork for the formation of affinity groups that brought together students of color, such as the Black Student Union, the Asian Pacific Islander Club, Unidos, and the Native American student club.
In addition to being one of the founders of La Salle’s Black Student Union, Amira started a school chapter of the organization called Youth Ending Slavery, a nonprofit that combats modern-day slavery by raising awareness about it and empowering youth to be advocates for change.
Amira participated in other La Salle activities, such as volleyball, Speech and Debate, and the Menstruation Awareness Club, a nonprofit that gets women the supplies they need for when they menstruate.
"I am grateful for the way La Salle has given me the resources to be academically successful in college," said Amira. "My four years at La Salle helped me realize the importance of being resilient, creating strong relationships within your community, and never being afraid to speak up about what matters."
Had she not attended La Salle, she said, "I don't think I could have gotten to that point."
Watch Amira in Jordan Wings Scholars Video
Published June 11, 2020 Print