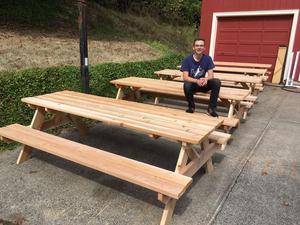 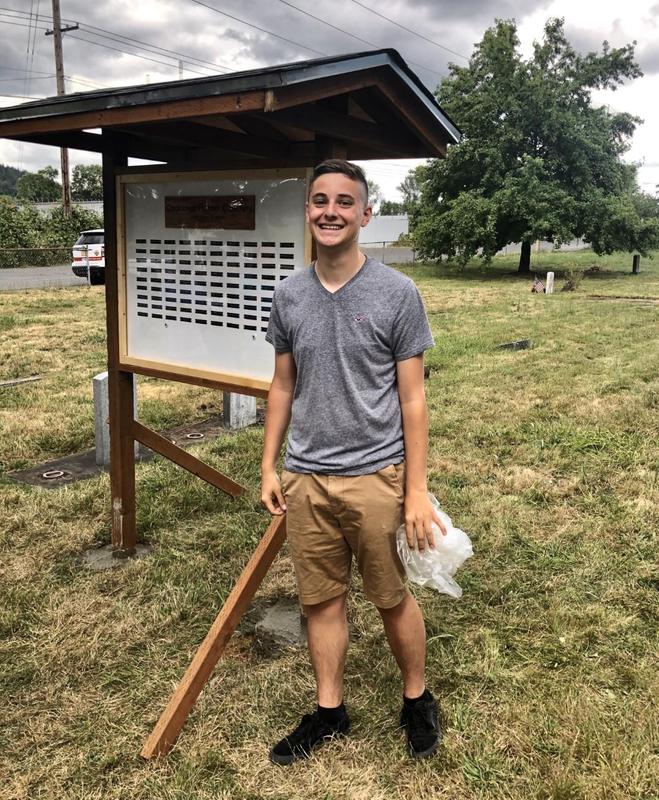 Silas Petersen '20, Reilly Smith '20, and Ramon Aragon '20 accomplish what only 2 percent of Scouts have accomplished

This year, three of La Salle’s 2020 graduates reached the Eagle Scout rank in the Boy Scouts of America organization. Since the rank was created in 1912, only 2 percent of eligible Scouts have earned this status.

Each also held a position of responsibility in their troops, demonstrated Scout spirit, and led, directed, and executed a service project that benefitted a religious institution, school, or community.

Here’s a look at each of their projects:

His Eagle project: Building five new 8-foot picnic tables at Canby Community Park. “First, I built a prototype picnic table to find the best design and then I secured a deal with Ace Hardware and Home Depot to get the materials for my project. Then I built all the tables with some friends and worked with the City of Canby to put them out in the park.”

Why he chose this project: “I chose picnic tables as my project because I go to that park often and there are always a lot of people there having picnics and parties yet there are barely enough tables for the amount of people that go to the park. So I wanted to fulfill a need.”

What he learned from his project: “The biggest thing I learned from my Eagle Project was persistence. Trying to get the materials for my project was very difficult. I went to several different places to try and get wood and over the summer — I would take my lunch break to call different mills  — yet I was turned down a lot. It took a lot of persistence to keep trying to get the materials but luckily I eventually got what I needed for my project.”

His Scouting experience: “I have been in Scouts since 6th grade and am a member of Troop 258 based in Canby.”

What he learned from being in Scouts: “Scouting has been the biggest influence on my life and has taught me how to be ‘Prepared for Life.’ I am very active in Boy Scouts, going to a meeting every Monday, and (am) approaching 150 nights of camping. I have been camping every single month since September of my freshman year. Through my experiences in Boy Scouts, I have learned how to be a servant leader, a good steward to the Earth, a responsible, trustworthy friend, a good citizen, and how to tie some knots.”“Although I am not planning on having a career in picnic table building, my Eagle project did relate to my interests in leadership. Through Boy Scouts I have developed a love for leadership that I hope to continue into the business world.”

His Eagle project: Constructing a kiosk at Clackamas Pioneer Cemetery that displays the names of 100 individuals who are buried in the cemetery, and whose location inside the cemetery is unknown.

Why he chose this project: “I chose this project because I wanted to do something to remember the past. Many of the people whose names are displayed on the kiosk did not have the money to afford headstones to mark their gravesite, but nobody deserves to be lost to time. It was interesting because my project was actually mostly unrelated to anything else I've been super interested in. My project included a lot of construction, which is something I had no experience in. I decided that I wanted to break out of my comfort zone.”

What he learned from his project: “I learned a lot about leadership over the course of this project. The goal of the project is to demonstrate leadership skills, and I think that leading a project based on something I had no background knowledge in really tested my skills.

His Scouting experience: “I have been involved in Scouting since I was eight years old, so right about 10 years. I am a member of Scouts BSA Troop 259, which is based out of Milwaukie Lutheran Church.”

What he learned from being in Scouts: Scouting has taught me a lot more than the normal outdoor skills and leadership. I've also learned a lot about how to be a positive member of my community, and I really feel prepared for the future.”

His Eagle project: Refinishing the benches in front of Christ the King Church and putting a retaining wall and flower bed around the statue of Jesus at Christ the King.

Why he chose this project: “I thought it was going to be a lot of fun. I had experience with refinishing wood because we refinish our decks yearly, and I didn't know how to do a retaining wall. So I had to learn how to do that as well. My grandfather does a lot of landscaping and he helped me draw it out.”

What he learned from his project: “I learned how to map out a project, recruit people, and plan a service project.”

His Scouting experience: “I have been in Scouts since 6th grade and am a member of a troop based at  St. John the Baptist Church in Milwaukie.”

What he learned from being in Scouts: “I loved being outdoors, and when I was elected senior patrol leader, I loved having the younger Scouts coming up and asking me questions. I love being a Scout and teaching younger scouts how to properly tie knots, set up tents, and cook food.”

What’s next: Studying to get an EMT while attending Clackamas Community College. He wants to become a firefighter.