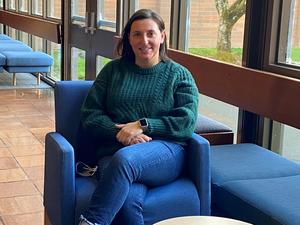 Kathleen Coughran, who has 20 years of experience as an educator, has been hired as La Salle’s new Vice Principal of Academics, filling the position vacated this summer when Mario De Ieso left for another job.

Coughran wears several hats in her new role. She serves as the point person for academic concerns, mentors teachers, leads the academic council, develops the master schedule, and coordinates Parent-Teacher Conferences, Back-To-School Night, and other academic events. She also coordinates the student support team and works with staff to assist struggling students.

“Kathleen comes to us with a strong foundation in Catholic education and leadership and has already jumped into the new role by supporting students, teachers and families during these challenging times,” said Alanna O’Brien, interim principal. “She is reflective, action-oriented, and collaborative and we appreciate having her on our team.”

Born in Eugene and raised in Oregon and Washington, Coughran and her three siblings grew up attending Catholic schools for all but one year of their childhood. The daughter of a nurse and a hospital director of radiology, Coughran was a good student who loved to learn. Becoming a teacher made sense.

“I thought I could have a positive impact on students,” she said.

After graduating from Bellarmine Prep high school in Tacoma, Coughran earned a bachelor’s degree in education from the University of Portland.

She landed her first teaching job at Portland’s St. Thomas More School, where she taught religion, language arts, social studies, and math to sixth-graders. After six years at St. Thomas More -- during which she earned a master’s degree in education from UP -- Coughran started working at Central Catholic High School.

Coughran then spent a couple of years teaching at public schools in the Portland-area. Though she enjoyed the students, the work, and her colleagues, she missed the liberty of being open about her faith, celebrating Mass with her students, and honoring saints who had inspired her.

Soon after realizing she wanted to return to a Catholic school, Coughran heard about the opening at La Salle.

At La Salle, Coughran said she can be herself -- a lifelong Catholic accustomed to starting meetings with prayer and sending silent blessings to those who look like they need them.

“I feel like I can effect more change in a community like this,” she said. “I get to be a faith-filled person on the team.”

Being at La Salle, she said, “feels like coming home.”