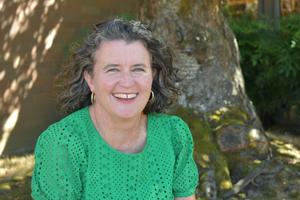 La Salle has named Alanna O’Brien its 11th principal, becoming the high school’s first female principal since the Christian Brothers founded it in 1966.

O’Brien, who has been serving as La Salle’s interim principal since Andrew Kuffner became its full-time president last summer, was selected after a nationwide search.

“Alanna O’Brien is uniquely poised to advance our efforts to evolve from a traditional academic structure and culture into one of innovation, inclusivity, and excellence that aligns with the comprehensive 21st Century learning and Lasallian formation outcomes we seek for our students,” President Andrew Kuffner said after announcing the hire to the school community on Friday. “I have confidence Ms. O’Brien is the right leader for this time in La Salle’s and our world’s history.”

O’Brien started working at La Salle as an English teacher 25 years ago. In 2000, her colleagues voted her as the school’s Lasallian Educator of the Year. A dozen years later, she shifted her focus to teacher professional development and curriculum development, serving as the vice principal overseeing both for seven years.

Kuffner said he selected O’Brien for her education, experience, and drive to continue the school’s academic innovation. Over the years, she has chaired La Salle’s English department, served as its Director of Service, and led its Lasallian Education Advancement and Lasallian Scholars programs. She also led La Salle’s summer school programs and annual social justice school theme initiative, coached in the girls’ soccer program, and chaperoned retreats. In recent years, she’s gained a new perspective on the school; two of her children now attend La Salle and the third one is in the pipeline.

O'Brien, said Kuffner, has been instrumental in leading the transformation of La Salle’s academic program and culture by establishing and enhancing Powerful Teaching and Learning (PTL) strategies, Understanding by Design (UBD), Science, Technology, Engineering, and Mathematics (STEM), Diversity, Equity, Inclusion, and Belonging (DEIB), and technology and design thinking programs at the school.

“Alanna strives to ignite in every student a passion for learning and excellence rooted in Lasallian core values,” he said.

'Learning is not stagnant'

O’Brien earned a bachelor’s degree in English from the College of Holy Cross in Massachusetts, and a master’s degree in teaching and an education administrative credential from Lewis & Clark College in Portland. She completed the Equity Certificate Program for School Leaders through the Center for Equity and Inclusion in Portland, and participated in the Lasallian Leadership Institute and the Discerning Leaders Program run through the Lasallian District of San Francisco/New Orleans and the Lasallian Region of North America.

Through her studies and experience, O’Brien said she has learned that the best education fosters a student’s purpose and direction while leaving room for wonder and joy.

“The purpose of school and a 21st Century education is not simply to acquire information,” she said. “Schools should allow for opportunities for deep learning in which students can apply their understanding of concepts in new and creative ways. The work of teaching and learning is not stagnant, but ever-changing in a complex, global society.”

A community of faith and scholarship

A lifelong Catholic and a member of St. Ignatius Catholic Church in Southeast Portland, O’Brien seeks to build a community of faith as well as scholarship at La Salle. In her application for the principal position, she shared how her beliefs ground her.

“My faith," she said, "provides me with opportunities for contemplation, challenges me to be a person of integrity, reveals direction in times of uncertainty or loss, and demands hope for a peaceful and equitable world.”