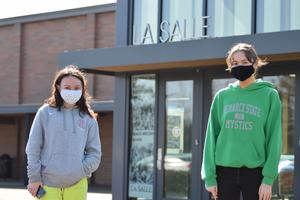 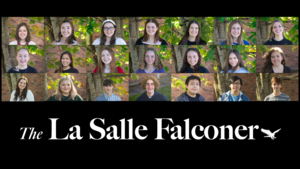 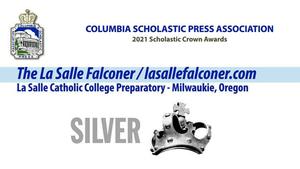 The Falconer is one of only 43 sites in the U.S. and beyond selected as a finalist for a national Pacemaker award

The La Salle Falconer, the student-run news site of La Salle Prep in Milwaukie, is one of 43 high school news sites and the only one in Oregon and Washington to be named a finalist for the National Scholastic Press Association’s Pacemaker award.

Judges selected the finalists after evaluating the coverage, content, writing, reporting, leadership, design, photography, and graphics of almost every weekly edition of The Falconer published so far this school year. The winners of the Pacemaker award — considered the most prestigious in high school journalism because it recognizes ongoing quality — will be announced on April 10.

“Everyone on The Falconer staff has worked so hard to come together as a team and produce quality content, especially throughout the pandemic,” said Maddie Khaw '21, one of the site’s two editors-in-chief. “I am really proud of the work we’ve done as a group, as well as the ways that each of us has grown individually.”

The honor is the latest of many for The Falconer, which is produced weekly when school is in session by English teacher Miles Kane's Journalism and Advanced Journalism classes.

Recognition is nice, acknowledged Khaw. “But there is so much more we appreciate about doing this," she said.

"This" is reporting and writing about the school and beyond. The Falconer covers news that affects the La Salle community on and off its Southeast Fuller Road campus. Staff members have written about school issues such as hybrid learning, the Black Student Union, and finals, as well as about global issues such as homelessness, the 2020 presidential election, and the pandemic.

“We want others to learn more about what we care about,” said Carlie Weigel '21, the other editor-in-chief of The Falconer. “Writing is often our way of doing something about the issues that we feel are important.”

Khaw said the goals of The Falconer are “to tell the stories of the La Salle community, to amplify people's voices, and to prompt dialogue and reflection.”

“Community storytelling and journalism are ways to give credit where it's due, bring light to subjects of confusion, highlight areas that are in need of change, and celebrate successes within the community,” she said. “Just as the goal of professional journalism is to help inform citizens and contextualize world news, we aim to help members of the community remain informed about La Salle student life and events.”

The two seniors hadn’t given much thought to the field of journalism before signing up for Kane’s class their sophomore year. Weigel took the class to earn a speech credit. Khaw enrolled to fill a gap in her schedule.

But the process of interviewing, writing, and sharing people’s stories soon captivated them. They liked getting to know what was going on in the world, then educating others.

"I like that we are doing something to keep the rest of the community informed," said Weigel. “I fell in love with it.”

Kane, who’s been teaching journalism for seven years at La Salle, educates his students by having them examine what the pros do. Students compare how different newspapers cover the same issue. They note the writing styles of reporters. They read hundreds of news articles every semester and take frequent quizzes about current events.

Kane also reminds them of their responsibility as members of the press.

“I’m trying to help students understand that journalism is one of the most important tools to draw attention to problems,” he said. “By shining a spotlight, journalism has the ability to bring about meaningful, important change in the world.”

Kane encourages his students to run The Falconer like a professional newsroom. Khaw and Weigel, along with fellow students on the editorial board, discuss, assign, and edit the articles. Then, every Wednesday night, they publish their work online.

They’ve also learned that what they publish can have an impact. Their stories about racial justice, for example, started conversations. Their articles about the LGBTQ community gave some of their story subjects the feeling they were being seen for the first time.

“The students said they appreciated their stories being told,” said Khaw. “It feels good that I’m making a difference."

Middle photo: A collage of the current staff of The La Salle Falconer.

Bottom photo: The Silver Crown Award, a first for The La Salle Falconer.