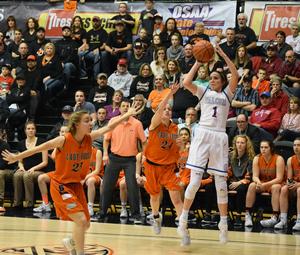 The Connecticut Sun selected the 5’9” guard in the third round of the draft, just days after she announced via Instagram she would not be returning to play for Oregon State next year.

“I am excited to start this next chapter of my life,” she wrote, “and cannot wait to see what God has in store for me.”

Goodman found out what’s in store for her Thursday afternoon, when her sister, Tori, and father, Kevin, came running out of the family’s Oregon City home screaming “You got drafted! You got drafted!”

“I wasn’t watching. I was shooting baskets with my mom outside,” she told Suns head coach Curt Miller when he called to congratulate her. “I was too nervous to watch.”

Under Coach Kelli Wedin at La Salle, Goodman helped the Falcons win state championships in 2015 and 2017. She was selected as Oregon’s 5A Player of the Year three years in a row, and left La Salle after making more than 1,400 points, 750 assists, 550 rebounds, and 375 steals.

“My time at LaSalle was great," said Goodman in a statement shared by her parents, Kevin and Kari Goodman. "Coach Wedin challenged me to be the best that I could be every day. She set us up with a very difficult game schedule and expected that we would win all of them. We won most, including two state championships during my time at LaSalle. The mindset that she instilled in me helped me be successful in college and gave me the best chance for success playing professional basketball….and hopefully coaching in the future."

Goodman also praised her La Salle teachers, who, she said, expected students to "give 100% and be the best that we could be."

"Because of their guidance and support," she said, "I was able to seamless adjust to college life."

Goodman kept growing at Oregon State, where, when not playing basketball, she majored in Human Development and Family Science. By the time she became a senior, she was a leader on the Beavers' squad, known for her range, accuracy, and clutch 3-pointers. She was selected to the 2021 All Pac-12, and averaged 49% on 3-pointers this season. She did all that - plus graduated in three years with a degree is in Human Development & Family Sciences. After graduating, she started working toward her master's degree in the College Student Service Administration program at Oregon State.

“We are so proud of all that Aleah accomplished and Oregon State and her decision to enter the WNBA draft," said Goodman father, Kevin Goodman. "To have the Connecticut Sun draft Aleah was a testament to all of her sacrifice and hard work. I had the privilege to be on the coaching staff during Aleah’s time at LaSalle. Kelli is a great coach and knows how to bring out the best in her players. She laid a strong foundation for Aleah that helped set her up for success at the college level, then onto professional basketball."

"Similarly, the administration and staff at LaSalle instruct in a way that provided Aleah with the framework to be successful in college," he said.

Two days after getting the call, Goodman was on her way to Connecticut for training camp.