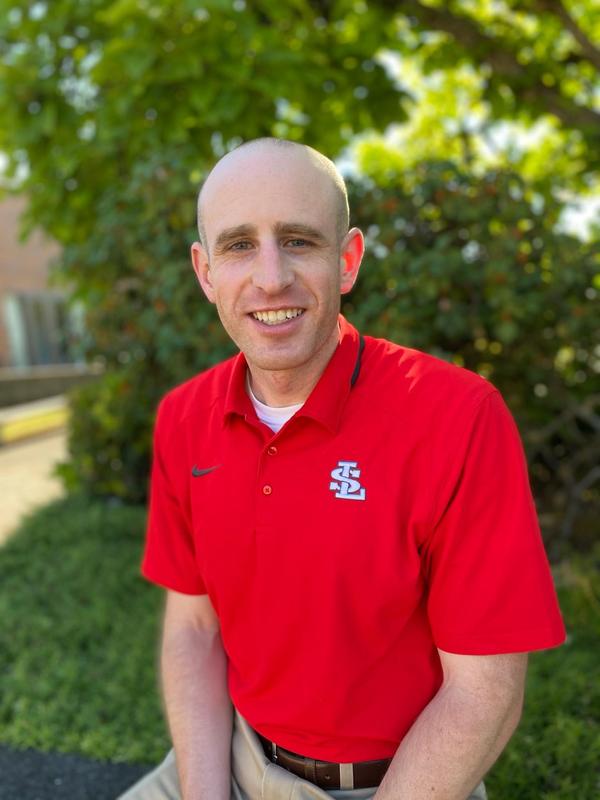 La Salle journalism and English teacher Miles Kane has been named the 2021 Mary Hartman Oregon Journalism Teacher of the Year.
Sponsored by the Oregon Journalism Education Association, the award is named for Mary Hartman, a University of Oregon Journalism School faculty member and former director of Oregon Scholastic Press.
Kane earned a degree in journalism from the University of Oregon and has been teaching journalism at La Salle for seven years, and English for eight years. In addition to showing the beginning and advanced journalism students how to write and present the news, he explains to them the critical role a free press plays in society.
"I'm trying to help students understand that journalism is one of the most important tools to draw attention to problems," he said. "By shining a spotlight,  journalism has the ability to bring about meaningful change in the world."
Real-world curriculum
Kane's journalism curriculum comes from the real world, not worksheets. He has students read hundreds of news articles a semester and consider the choices professional journalists make as they cover news. He requires them to keep up with current events — he quizzes them weekly — and challenges them to examine the range of takes different media outlets have on the same event.
Students keep Kane's lessons in mind as they publish The La Salle Falconer, La Salle's student run-news site. Not only do they cover school plays and sports; in recent years, their articles and opinion pieces have focused on issues such as racism, violence, and gender inequality.
Over the years, Kane's students have earn a raft of awards, including a prestigious Columbia Scholastic Press Association Crown award. The Falconer was also a finalist for the National Scholastic Press Association's Pacemaker Award. This week, Falcon journalists earned several awards — including Best in Category for student news website — in the Oregon Journalism Education Association's annual Student Media Olympics.
“Miles and his students are creating great journalism,” said Brian Eriksen, the Oregon State Director of the Journalism Education Association.
Praise from students
Falconer co-editor-in-chief Carlie Weigel '21 said La Salle's student journalists owe a lot to Kane. In the years she's been in his class, she has learned to appreciate the power of the free press and the responsibility journalists have as purveyors of the truth.
"He consistently spends time reminding our class that we are the guardians of the First Amendment, and that without journalism, our democracy dies," she said. "He has shown us that telling and shedding light on the stories of a community is critical work that happens as a result of our efforts. We have the courage to invest in questions and pursue their answers solely because of him."
Maddie Khaw '21, The Falconer's other co-editor-in-chief, credits Kane for teaching student journalists not just how to report, but how to lead.
"I’ve learned about leadership and ethics, about language and politics, about decision-making and responsibility," she said. "I’ve learned how to be prudent and meticulous in my work, and I’ve learned how to take lessons from my mistakes and actually apply those lessons later on."
The two praised Kane for being a supportive and caring teacher whose lessons will be with them for life.
"I’ve learned how to write an email, properly use punctuation, approach those I don’t know well, come to a thoughtful conclusion, stand up for myself, speak for an audience, think critically, act professionally, be creative, and stay informed," said Carlie. "The lessons I’ve learned from him have shaped me into the person I am today and prepared me for the future — he’s truly the greatest teacher ever."
Without Kane, said Maddie, "I know that I would not be the person I am today."
Published June 1, 2021 Print