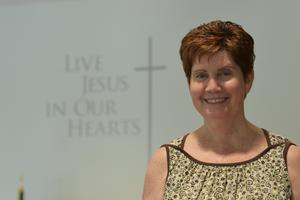 Office secretary Rhonda Fisher wraps up a career caring for others

For more than 20 years, Rhonda Fisher was one of the first faces students, staff, parents, and visitors saw when they entered into the school.

What a blessing that was. Fisher’s sweet smile and awe-shucks demeanor had a way of putting people at ease - even if she was in the middle of issuing a sweater to bring someone into compliance with the dress code.

After 23 years greeting all who entered, Fisher retires as the secretary of La Salle's Main Office this month.

"I've been thinking about it for a few years," she said. "I'm off in July anyway, so this just seemed like the best time."

'The best place to be'

Fisher grew up in Missouri as the second of three children of an airline mechanic and a homemaker. She loved sports, dancing three to four times a week and playing softball and kickball for fun.

In high school, she was a majorette who wowed the crowd by twirling a burning baton during a halftime performance her senior year.

Though she briefly considered becoming a teacher, Fisher landed a job with the Department of Motor Vehicles  right after high school. A few years later, she moved to Oregon to be near her mother who had moved to the Northwest to be near Fisher's grandmother.

Over the years, Fisher held a variety of office jobs; she was managing the office of a marketing firm when a friend who knew she liked kids suggested she apply to La Salle. She found it a perfect fit.

La Salle's front desk, she said, is “the best place to be because I get a chance to see all the students. Watching them walk through the doors every day makes my heart happy.”

Fisher served as the grease of the Main Office, helping it run smoothly and efficiently. She greeted visitors, tracked down students, and helped parents and staffers find what or who they needed.

"Rhonda brought a genuineness to the front office that made it feel like home," said La Salle Prep President Andrew Kuffner. "She wanted to make everyone feel welcomed and included. If a parent brought in a treat for the staff at lunchtime, for example, she would reserve half so the teachers in second lunch got some too. That’s who Rhonda is - always taking care of people."

Though her official job description included answering phones and guiding guests, Fisher's unofficial role was School Mom. Along with former fellow front desk jockey Judi Johnson Powell '71 (who retired last year), Fisher consoled broken-hearted teens, motivated reluctant students, and hugged anyone facing tough times. Without going into details, Fisher shared that she also had faced tough times in her life. If she survived, they could, too.

"Ms. Fisher was just always such a bright spot in everyone’s day," said Tayler Elizabeth Cheney '15. "Even if you were in the office because you were in trouble, she never treated anyone without the utmost respect and was always spreading love and joy to all."

Some of her favorite memories, said Cheney, were of hanging out in the office with Fisher and Powell after school.

"We’d eat snacks, play games, and talk about our lives," said Cheney. "But most importantly, we always felt welcome, seen, and heard thanks to her!"

What’s next for Fisher? She and her husband plan to sell their Gresham home and spend time with their grandchildren and great-grandson in Washington. Then they’ll travel until they settle - likely with her collection of gnome statues and stuffies - in Missouri.

Though she’s looking forward to the future, Fisher finds it difficult to leave La Salle.

“There are so many things I will miss,” she said. “The students, of course. They will always be special to me and I hope to continue these relationships throughout my lifetime.”

Fisher also will miss “amazing, thoughtful parents" as well as her co-workers - and many of their children - who carved a special place in her heart.

“I have been so blessed to be in such a loving community,” she said. “LaSalle has been my family for 23 years and I'm going to miss everyone.”