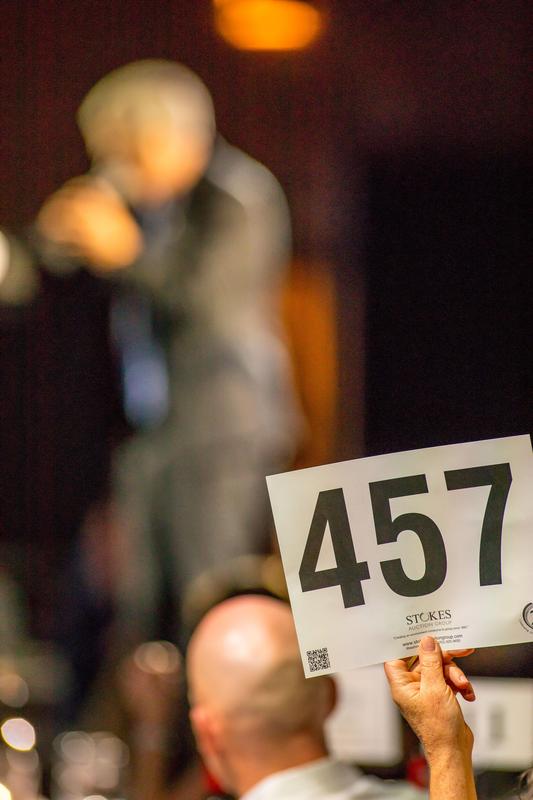 Donors contribute $335,600 during the annual fundraiser
La Salle's Believe Benefit Dinner, the school's largest annual fundraiser of the year, returned to campus on Oct. 23. Students, staff, volunteers, and vendors transformed the gym in the Saalfeld Athletic Center into an elegant ballroom where donors dined and donated to support La Salle programs and students.
Though the audience was capped at 300 - about 100 fewer than most other years because of the pandemic -  a few dozen more watched and joined the festivities via live stream. Others bid from afar on trips and events offered in the online silent auction.
By the end of the evening, donors contributed $335,600. The first paddle raise brought in $174,000 for the Dollars for Scholars fund; the second paddle raise brought in $26,000 to buy professional-grade audio and video, recording, and lighting equipment.
"Without a doubt, our community was ready to return for the benefit of the students and families," said Julie Dowhaniuk, La Salle's director of giving and donor relations.
The evening was unique in that in-person and online events were held simultaneously. With just a few clicks, donors not even in the room could give while watching the fundraiser online.
Several students took turns standing in the spotlight to share their experiences at La Salle. Composer Michael Allen Harrison accompanied performers Brooklyn Chillemi '22, Angelina Lopez '24, and Izzy Simonutti '23 as they sang one of the songs he wrote for the school's fall production of "Alice in Wonderland." The students, he said, sounded "angelic."
Another notable performance: The choir, under the direction of music teacher Otto Wild, led President Andrew Kuffner and everyone in the gym in an original song set to the tune of The Beatles' "All You Need is Love."
Published November 4, 2021 Print