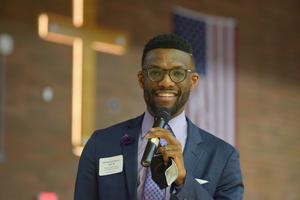 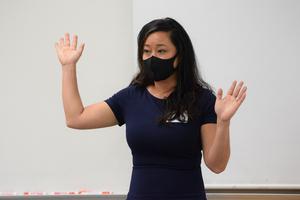 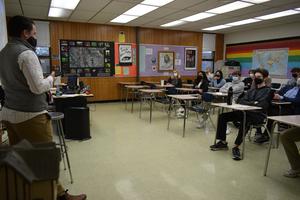 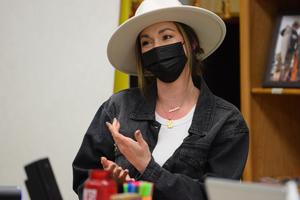 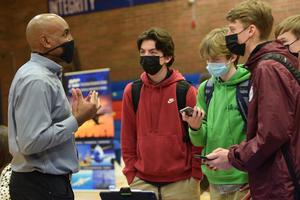 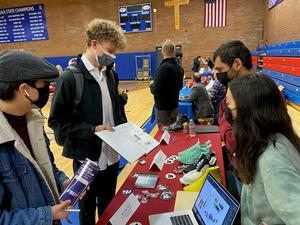 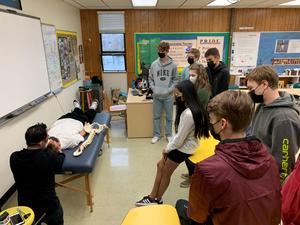 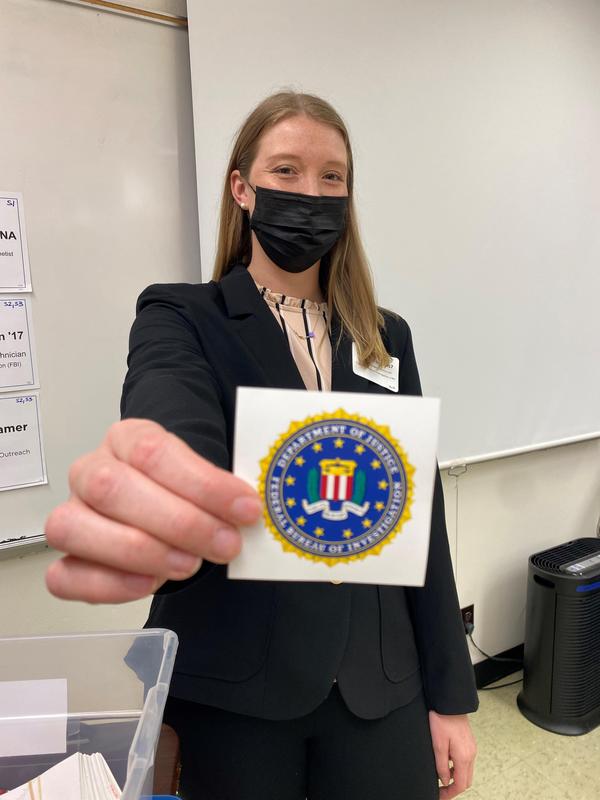 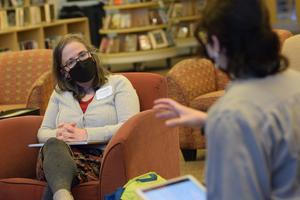 During Career Day and Fair, alumni, parents, and other professionals tell Falcons about the opportunities in the world of work

Sophomores, juniors, and seniors peeked at professional possibilities during a Career Day and Fair sponsored by La Salle's Alumni Association on Monday, Feb. 28.

The day was intended to give students a chance  to explore careers, discover professions they might not have considered, learn about institutions that align with their interests, and connect with adults who work in fields that interest them.

Dr. Michael Cormack Jr. '99 – now the deputy superintendent of Jackson Public Schools in Mississippi – kicked off the day with a keynote speech in the gym. During his talk, he encouraged students to pursue a vocation that is both fulfilling and fun.

"Do you get a kick out of it?" he asked as he walked on the basketball court and looked at the students sitting in the stands. "Are you any good at it? Does anyone want you to do it?"

Cormack also stressed that how one does a job is as important as the job itself. To illustrate his point, he shared the words of poet Maya Angelou:

Explaining the world of work

After the keynote, students fanned out to classrooms where 50 adults – a mix of alumni, parents, and Falcon friends – discussed in person or via Zoom what they do.

The guest speakers, who work in medicine, engineering, law, design, architecture, technology, security, service, the military, the arts, and other arenas – described the steps students could take to enter their respective fields. They spoke about their duties, their day-to-day responsibilities,  and what they love about their jobs. They discussed how they got where they are, and described jobs similar to theirs. Several mentioned the importance of maintaining a healthy work-life balance; a few shared that they changed careers until they found the one that resonated with them.

Physical therapist Jason Vila '92 explained what he does by demonstrating what he does. First, he stood in the front of Room 112 and held up a plastic replica of a human spine. Then, using tools of his trade, Vila examined a student as if the student were a patient.

Professionals also got a chance to talk shop during the Career Fair, where 11 adults staffing tables in the gym answered questions of any student who stopped by.

What does it take to be a pilot? A speech pathologist? An engineer? What's the best way to prepare for a career in photography?

Career Day, held annually prior to the pandemic, was brought back at the request of the Alumni Association, which provided food, volunteers and supplies for the event. Students in La Salle’s new Leadership class got involved by setting up tables for the Career Fair, running a raffle to encourage participation, and creating a “passport” that suggested questions students could ask the professionals, such as “What do you like and dislike about your job?”

Students also filled their passports with feedback on the day.

“Today, I learned that being a software engineer goes beyond just knowing how to code, but also collaborating to fulfill client needs and creating and designing innovative patterns,” wrote one.

“It’s neat how topics I’m interested in could be completely unexpected job opportunities,” said another.

By the end of the day, students said they appreciated the chance to learn about different opportunities. Riley Johnson '24 said she found the day "eye-opening."