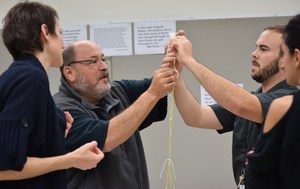 Oregon Catholic high school educators gathered at La Salle Prep to learn from each other.

MILWAUKIE – More than 375 Oregon Catholic high school educators gathered at La Salle Prep this month to learn from some of the greatest instructors around: Each other.

The educators took turns leading sessions during "Building the Kingdom Together through Excellence," a day of workshops and prayer held on Oregon's statewide teacher in-service day, Oct. 13.

"We are offering the best of what we have to each other," said Andrew Kuffner, La Salle's principal and one of the principals who conceived and organized the day of training.  "We have these amazing educators. Let's lift each other.”

Regis' theater teacher Anna Boedigheimer had those in her “Collaboration, Community Creativity, and Chatter” session break into teams to create structures out of spaghetti, string, tape, and a marshmallow.

“It’s getting teachers to understand how to get kids to collaborate, how to have purposeful chatter, and how to build community in your class,” she said. “Your students are asking questions. It’s a safe space.”

The conference started with music and a prayer service that involved ministries from almost every school. Then keynote speaker and counselor Roy Petitfils – a graduate of Catholic High in New Iberia, La. – described how educators could support teenagers struggling with anxiety, depression, or trauma.

“Walk with them,” he said. “Let them know we are arm-in-arm with them or not very far.”

Throughout the day, educators talked, traded ideas, and caught up with friends and colleagues. Many said that one of the best parts of the day was simply being with others who share their calling to teach in Catholic schools.

“I wish we could do it more often,” said Caitlin Whitty, a service coordinator in the campus ministry office of St. Mary’s Academy. “It’s nice to come together as a greater Catholic community for the common goal, which is preparing our students for college in an atmosphere of faith.”