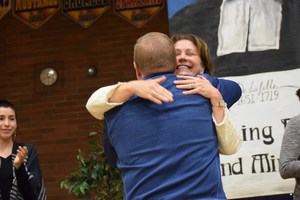 President Denise L. Jones is honored by colleagues for her spirit and leadership
La Salle Prep President Denise L. Jones was recently named La Salle's Lasallian Educator of the Year, an honor awarded by the school's faculty and staff.
During her 15 years at the helm, La Salle has grown to 700 students, improved its facilities, and become more fiscally sound.
"Thank you so much for this wonderful honor," she said after Principal Andrew Kuffner draped a blue-ribboned Lasallian medal around her neck.

In her nomination for the award, staffers praised Jones' intelligence, vision, and strength.

“We have changed for the better because of Denise Jones," said one staffer in nominating Jones for the award. "She leads with humility, integrity, and grit. She has seen beyond the challenges, turning them into opportunities, and championed a vision that has put us on a path of excellence and innovation.”

Jones, who plans to retire at the end of this school year, took an unconventional path to school administration. After graduating from the University of Portland, she worked as a pediatric trauma nurse and in hospital administration for more than a decade before becoming the development director for Ronald McDonald Houses of Oregon.

She came to La Salle to be its foundation director in 2001; two years later, she was named the school's third president.

Jones received a standing ovation from the students, staff, friends, and family gathered in the gym to see her get the award during the Heroic Vow ceremony.

In her remarks to the audience, she spoke of grace and gratitude.

"My prayer for all of you is that you will understand that power of grace," she said. "Be grateful for those moments and individuals that bless you with it. And remember: You never ever do it alone.”