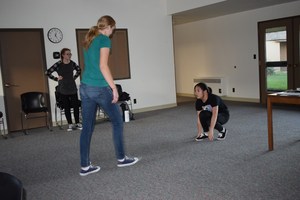 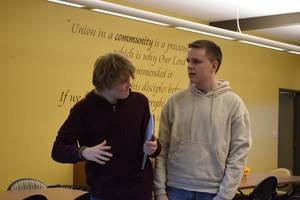 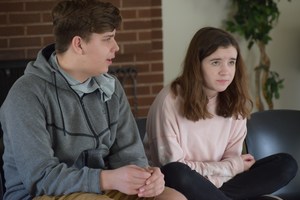 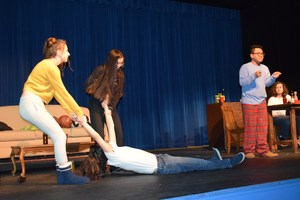 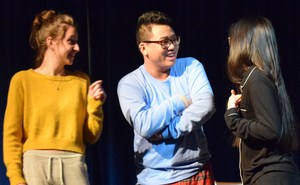 Playwright Anna McClow '19 directs actors in her one-act play, "The Last Day."
Lasallians will perform five student-written, directed, and produced one-act plays at 6 pm on Thursday, March 1, in the theater. The performance will make up for the one snowed out last week.
The La Salle One-Act Festival, the brainchild of English teacher Victoria McDonald and drama teacher Michael Shelton, will showcase the work of "wonderfully creative students who have a way with words, who use their words in a powerful, humorous, thoughtful way," said Mr. Shelton.
"We wanted to give them an opportunity to push beyond the words on a page and breathe life into those words through a performance," he said.

Students submitted 20 scripts to the competition; the following were selected to be staged at the festival:
Tickets will cost $5 each at the door; La Salle faculty and staff attend free. All seats are General Admission.
Questions? Contact Michael Shelton.
Published January 31, 2018 Print