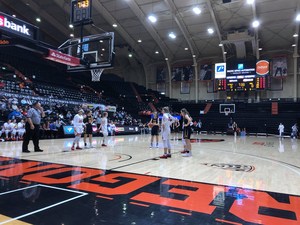 The girls basketball team will play Marist for Oregon's 5A title on Friday
With a 40-26 win over Bend on Thursday, the Falcons clinched a berth in the state 5A title game.
The championship game will be at 6:45 p.m. Friday at Gill Coliseum at Oregon State University in Corvallis. La Salle will take on Eugene's Marist Catholic, which beat Silverton 46-39 in its semifinal game.
Friday's game will pit this year's top-ranked 5A teams against one another. Going into the tournament, Marist was ranked #1; La Salle, the defending 5A champion, was ranked #2.
Go Falcons!
Published March 8, 2018 Print