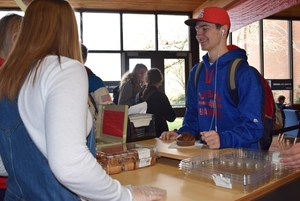 Lenten fundraiser will benefit Lasallian students in Kenya
Lasallians are raising money for students at Mwangaza College in Kenya during Lent.
Mwangaza is La Salle's "twin," which Lasallians support with donations that buy supplies and other school necessities. The Student Council's Lenten fundraiser team hopes the school can raise $5,000 during Lent, said Director of Service Kelsey Peyton.
La Salle was paired with the college through an initiative of the Christian Brothers to match districts in need with districts capable of helping them out.
Schools in the Lasallian Region of North America are twinned with schools in Africa's Lwanga District.
Falcons donated to Mwangaza College several ways during Lent. They bought muffins before school on Fridays and they purchased popcorn during this week's Film Festival. They also donated cash during Falcon Formation and Falcon Time.
If you've still got something to give on this last day of the drive, leave it with Ms. Peyton.
Published March 8, 2018 Print