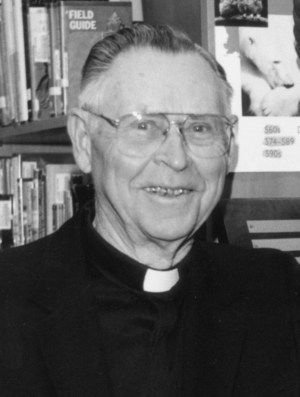 $1 million will go toward expanding and renovating the entrance to La Salle’s athletic facilities to make the campus safer and more secure. The project, say school leaders, will “enhance the overall student experience” by renovating the locker and training rooms and replacing the gym floor.

When complete, the renovated athletic facility will be named for the late Father Lawrence Saalfeld, a longtime La Salle trustee and church pastor who Franz Finley described as “one great priest.”

The balance of the gift will establish – as part of the La Salle Educational Foundation – the Father Saalfeld Endowment Fund, which will award need-based scholarships to La Salle. The first Saalfeld scholarships will be awarded for the 2018-19 school year.

“The gift has a special sentimentality because it comes from Elsie Franz Finley, who served La Salle as the first woman trustee,” said Denise Jones, president of La Salle Prep. “It also honors two values that Father Saalfeld held dear: Access to Catholic education for all students and the life lessons kids learn through sports.”

A fan in the stands, a friend in the halls

Saalfeld was faithful fan of the Falcons. He often came to basketball games and cheered for La Salle from the bleachers. On the Feast of St. Nick, he dressed up as Kris Kringle and walked down hallways of the school to give candy to students.

“Naming this space after him is perfect because he knew how to connect with kids,” said Jones. “It was a delight to witness the joy he received from simply being with our students.”

Franz, who was a banking executive, and his sister got to know Father Saalfeld while Saalfeld served as pastor of Milwaukie’s St. John the Baptist Catholic Church from 1968-1983. The family got involved with La Salle when Saalfeld invited Franz Finley to join him on the school’s board of trustees.

“Catholic people, especially in the southeast metro area, have a responsibility to provide religious education to our youth,” said Saalfeld, who died in 2007. “La Salle has been and continues to be vital to the Church’s mission and deserves our full support and that of the community at large.”

Request from long ago

The donation came as a result of a letter Saalfeld sent to the Franz family about 20 years ago. In the letter, the priest asked the siblings to fund a new chapel for the school.

In January – a little more than a year after her brother died – Franz Finley came across the letter again. Curious, she called La Salle. After learning the chapel campaign had ended, she asked if there was another way her family could honor Father Saalfeld at the school he loved so much.

Yes, she was told. There was.

“We have much to be thankful for at La Salle,” said Andrea Burns, La Salle’s vice president of foundation and major gifts. “We continue to realize the many blessings from those who came before us – those who believed and had faith in the Lasallian mission and the school.”

Since growing up in Milwaukie, the Franz siblings have made an enormous impact on Catholic ministries throughout the Northwest. Their support of the University of Portland led to construction of a 78,000-square-foot academic building named Franz Hall. In addition, their gifts to the Providence Portland Medical Foundation led to the establishment of the Robert W. Franz Cancer Research Center, which has more than 100 researchers specializing in immunotherapy.

The gift – the second-largest La Salle has received since opening in 1966 – means that Robert Franz, Elsie Franz Finley, and Father Saalfeld always will be part of the Falcon family.

“We are incredibly grateful for their tremendous gift,” said Burns. “It will have a lasting impact on our community, especially our students.”