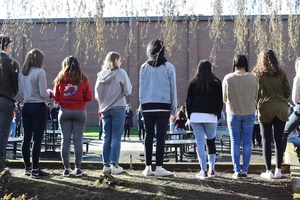 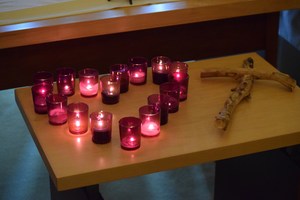 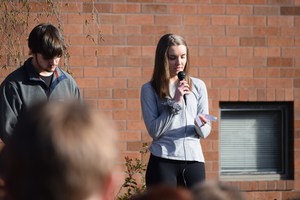 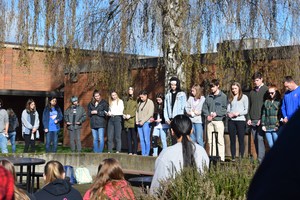 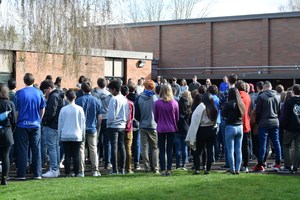 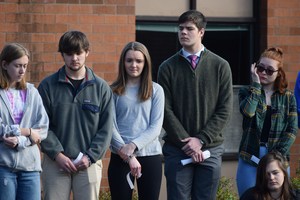 Students who planned today's walkout designed it as "a nonpartisan memorial and call-to-action to unite La Salle students around the issue of school safety."
Hundreds of Lasallians walked out of their classes today to remember students and staff shot and killed at a Florida high school one month ago.
At 10 am -- the same time similar walkouts were staged at schools all over the country -- they streamed quietly down La Salle's corridors to the cafeteria courtyard. Once there, they stood, listened, and prayed while student leaders described each of the 17 victims of the Feb. 14 massacre at Marjory Stoneman Douglas High School in Parkland, Fla.
"The point of this walkout is to honor the memories of the victims of (the) Parkland shooting along with the victims of the Las Vegas shooting, the Pulse nightclub shooting, the San Bernadino shooting, the Clackamas Town Center shooting, and the countless other victims of gun violence with action," said Amira Tripp Folsom '20, one of the students who planned the nonpartisan memorial. "It is up to you to decide how you carry this out."
Students, she told the crowd, can take steps to help prevent tragedies like this by "doing your part to establish a community where nobody feels ostracized or left behind."
"What you can do can be something as simple as going up to someone who may be sitting by himself or someone who has different views than you do and getting to know them," she said.
Organizers said that they hope Lasallians continue taking interest in making schools safer. They encouraged classmates to attend the March for Our Lives on March 24, and participate in another national school walkout on April 20, the 19th anniversary of the Columbine High School shooting. Some said that, down the road, they hope to encourage their classmates to register to vote.
"The reality is, it could happen here," said organizer Maren Sheahan '19. "We should do whatever we can to protect ourselves and one another."

As the group outside spoke, a handful of students sat quietly in the school chapel, where 17 votive candles flickered on the altar. Others stayed in their classrooms working on projects or doing lessons with teachers. In a letter he recently sent to current La Salle families, principal Andrew Kuffner said students would not be penalized if they respectfully participated in the tribute. At the same time, they would not be expected or required to join in.

The walkout was scheduled to last 17 minutes, one minute for each of the lives lost at Stoneman Douglas. But organizer Grant Starr '18 said the conversation ignited by the Florida shooting will continue long after today.

"This is a conversation that will last for years," he told those in the courtyard before they returned to class. "It will be uncomfortable and tense at times, but it is required. At the heart of this discussion is how we see our society. Are we willing to take real, substantial steps to protect our children and people, even if it means being controversial or restricting ourselves? Do we value life above all things? Do we believe in antagonism and matching violence with violence? Or can we put some restrictions on everyone, accepting those limitations, so that everyone can live in peace and without fear?"

"These are the questions we have to answer in our discussions going forward," he added. "And like the Stoneman Douglas students, I will not accept an end to this discussion until we have real, tangible solutions advocated and passed. I hope you won’t either."