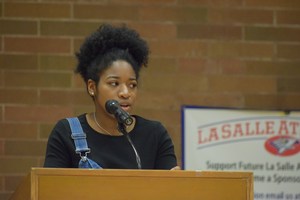 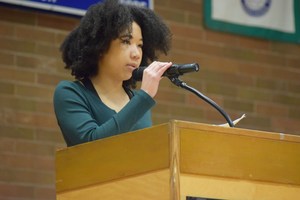 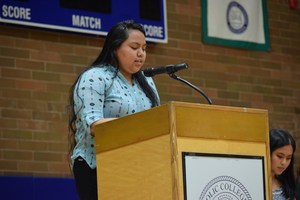 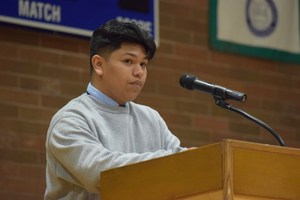 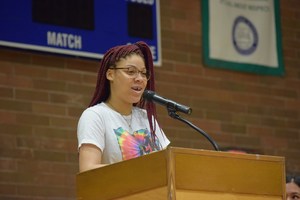 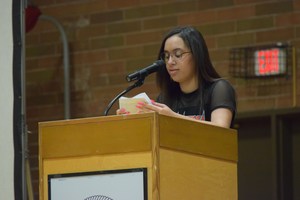 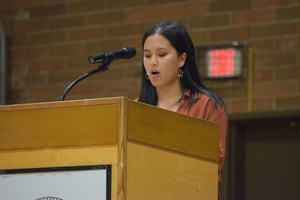 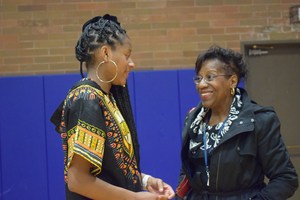 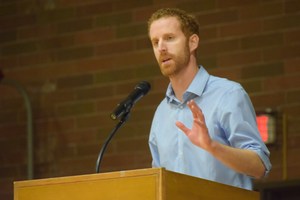 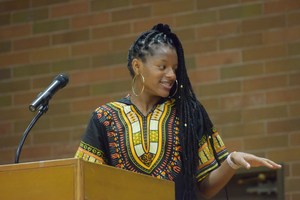 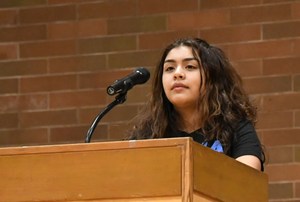 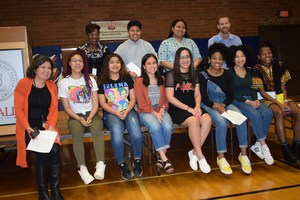 Lasallians dedicate the week to understanding themselves and others

During the assembly on identity, Michaela Carter '18 introduces and hugs her grandmother and inspiration: Margaret Carter, the first African-American woman elected to the Oregon Legislature.
Lasallians reflected on who they are, who they've been, and who they want to be this week, when the school focused on its yearlong theme of identity.
Administrators selected the topic last year, after seeing students and staff grapple for a way to discuss  inclusion and race.
“The Lasallian core value of ‘Respect for All Persons’ is one that our nation is struggling with now,” said Alanna O’Brien, vice principal of curriculum and professional development. “Before we can talk about the violence and struggle in our nation, it’s important that we’re self-reflective of our own identity and the lenses through which we see the world.”

After the assembly, counselor Nancy Orr hugs
speaker Philicia Robinson '18.
Theme Week began with students pondering their names, and how their names affected their identities. Students also came up with three words about themselves; the words were used to make word clouds that now hang in the Main Hallway.

The week also included classroom conversations and a film festival during which students watched movies that dealt with identity issues, such as "42," about the racial integration of baseball.

And on Wednesday the entire school community gathered in the gym and listened as several students of color tell their stories.

One shared how, years ago at another school, a teacher made her move to the back of the class because her curly Afro was "causing a certain distraction to other kids." Another described her epiphany that she identifies as a Chicana more than anything else.

Philicia Robinson '18, who delivered the keynote speech, challenged everyone in the gym to step outside of their comfort zones.

She challenged students "to keep an open mind and support and invest more time in making friendships with people outside of your race," she said.

Her words to teachers: “Be the teacher who acknowledges the differences in their students and encourages that everyone else does so as well.”

Students and staff responded to Robinson and other speakers with attention, applause, and, at times, standing ovations.
“Keep thinking about your identity and what you can learn from the identity of others,” Amira Tripp Folsom ’20 said before students headed back to class. “Together, we can ensure that even during the hectic school year, every individual is truly valued.”
Photos by the La Salle Communications team and Kendal Shride.

Students applaud Philicia Robinson '18 after her speech, during which she challenged fellow students to "be that person to stick up for those who are too uncomfortable to do so. Be that person to see when something is wrong and actually speak up about it."
Published March 21, 2018 Print