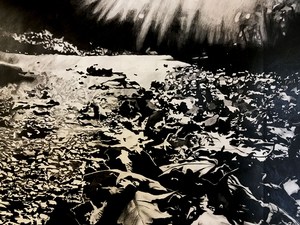 "Autumn Leaves," a graphite drawing by Caitlynn Young '19, has won a silver medal in the 2018 national Scholastic Art & Writing Awards competition.
"It's really an honor," said Young, whose winning drawing started as a class assignment to draw a replica of a photograph of leaves.

Works that earn national medals are considered among the "most accomplished" student pieces in the country; fewer than 1 percent of the 350,000 student entries earned that distinction in this year's contest.

"This recognition shines a light on your leadership, your faculty's efforts, and your school's dedication to education in creative arts," said Virginia McEnerney, executive director of the Alliance for Young Artists and Writers, in informing the school of the award.

The annual competition has recognized talented teenagers since 1923. Over the years, it has honored creatives such as artist Andy Warhol, actor Robert Redford, and writers Truman Capote, Sylvia Plath, and Joyce Carol Oates.
"It's exciting to see the growth of the visual arts program at La Salle," said art teacher Cha Asokan. "The students are looking for many more opportunities to showcase their talent and build their skills as they grow as creative thinkers and artists."
"Autumn Leaves" is on display in the school's Counseling Center this spring. After that, it will likely go on permanent display in her parent's house, said Young.
"I think they will find a place for it."
Published April 12, 2018 Print