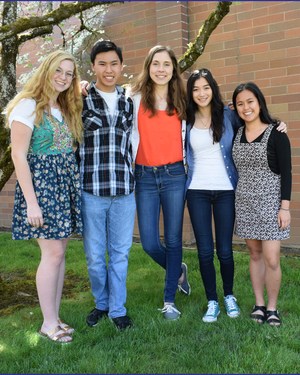 Introducing the valedictorians and salutatorians of the Class of 2018

This year's highest academic honors go to Sabrina Reis, Derek Wong, Isabella "Izzy" Ierulli, Amber Young, and Alexis Han.
Derek Wong '18 and Sabrina Reis '18 have been named valedictorians of the Class of 2018 by demonstrating "the highest academic achievement in their class."
Alexis Han '18, Isabella "Izzy" Ierulli '18, and Amber Young '18 have been named the class salutatorians for their academic achievement as well.
According to the La Salle handbook, the school's Administrative Team, in consultation with the Academic Council, select the valedictorians and salutatorians. Primary consideration is given to cumulative weighted GPA after seven semesters.
Other considerations include courseload, grades, and "the level of rigor" of a student's academic program of studies.
The valedictorians will speak at graduation at 11 am on Saturday, June 16, at Rolling Hills Community Church in Tualatin.
The salutatorians will speak during Baccalaureate at 7:30 pm on Friday, June 15, at St. John the Baptist Church in Milwaukie.
Congratulations, Falcons!
Published April 30, 2018 Print