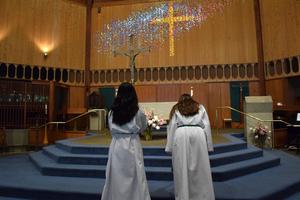 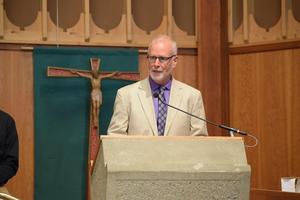 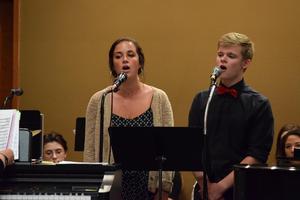 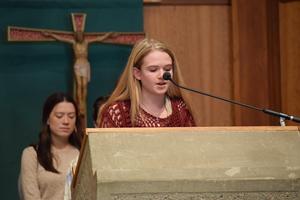 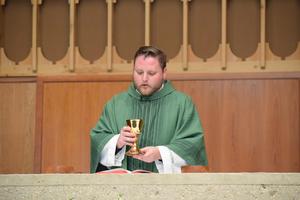 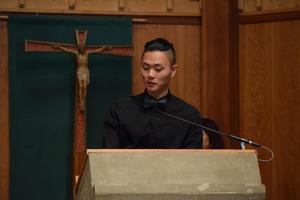 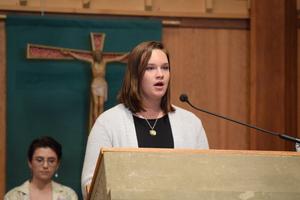 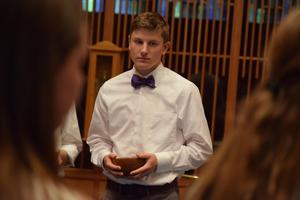 'The love in our hearts should propel us into action'

During the last schoolwide liturgy of the year, La Salle's Officer of Faith, Evans Brackenbrough '18, posed a question to everyone in the sanctuary: "How are you called as a Lasallian to serve beyond the school community?"
Without waiting for an answer, he continued: "We are called to emulate Jesus, to emulate St. John Baptist de La Salle, to reach out and help up those who have fallen, those who have been cast aside," he said. "The love in our hearts should propel us into action. For if we love one another, our world can become one people guided by faith, bonded by service, and united in community."
The Mass, held at Christ the King Catholic Church in the middle of the week honoring the school's founder, focused on "Leave to Serve" -- the second half of La Salle Prep's motto.
Father Michael Brennan, O.PREAM, who presided over the service with his brother Father Christopher Brennan, CSC, reminded everyone that they can always help close to home.
"So often we are looking so far ahead that we miss the opportunities right in front of us," he said.
The service included the blessing of president Denise L. Jones, and teachers Mike Devenney, Barb Bryan, and Maria Schroeder, who are all leaving La Salle at the end of the school year. The celebration ended with students and staff singing Bill Withers' 1972 pop hit "Lean on Me."
As they sang and clapped to the music, many smiled at the song's message:
"Just call on me, brother, when you need a hand...we all need somebody to lean on."