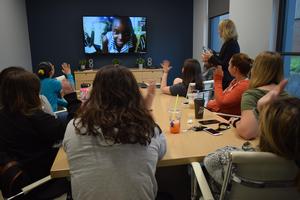 Nearly 9,000 miles separate La Salle students from their counterparts in the African nation of Uganda. Yet with the help of technology, it seemed as if they were in the same room on the fourth Friday of May.

On that morning, several La Salle students gathered around a table in the school office’s conference room and spoke to teens in Uganda via phone and computer.

“Hi over there,” a Ugandan boy said as he looked into the camera that broadcast his face to a TV screen in the La Salle office.

The screen meeting was the culmination of Debbie Schuster’s Personal Wellness and Stress Reduction class, which challenges students to take charge of their health and that of their community.

As part of the class, La Salle students examined the Happy Planet Index, which measures the well-being of people in different countries. Then Schuster, with the help of her sister, professional health advisor Kristin Bodiford, Ph.D., arranged for the Lasallians to discuss what they learned with students in Uganda, a country Bodiford knows from her work in developing countries.

“What we want to have is an awareness of what we can do to help the health and well-being of our planet,” said Schuster. In addition, she wants to give students “an awareness of the challenges that underdeveloped countries face and an appreciation of what they have.”

Because of the technical difficulties, the Ugandan students couldn’t hear the La Salle students. So instead of having a conversation, the Lasallians listened as the Ugandan teens weighed in on issues such as infant mortality and access to healthcare in their country, where the life expectancy is 57.1 – more than 20 years shorter than the U.S. life expectancy of 78.8.

“I want to see us solve the problems,” said a Ugandan boy named Marvin. “I want to change the conditions we are going through...young people are the leaders of tomorrow."

As the Ugandans took turns speaking into the camera, the Lasallians greeted each speaker with smiles and waves, then leaning in to capture every word. About an hour into the call, they lost connection; the Ugandans’ laptop died and there was no electricity available to turn it back on.

Still, the experience was long enough to make an impression on the La Salle students.

"I like seeing kids our age from different countries," Maren Sheahan '19 said afterward. "We are very similar."