Stars are aligning for the Class of 2018 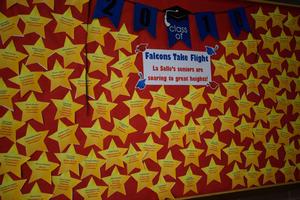 Students plan to study, work, and explore next year
The stars are coming out for the Class of 2018.
In fact, the bulletin board in La Salle Prep's main hallway bears a star for every senior who's declared his or her intentions after graduation.
Where's this class of 142 going?
"Hawaii, Alabama, Charlotte, all up and down the west coast, Pennsylvania..." says Renee Giesemann, head of the counseling department. "Basically the four corners of the US and in-between,"
Most will spend next year in college, and a handful plan on enrolling in trade school, joining the military, or taking a gap year to work, volunteer, travel, or explore a career.
The college-bound are headed to about 60 campuses. Nearly half of the students will go to out-of-state schools, and about one-third will go to Catholic universities, she said. The most popular destination: the University of Portland, where 16 Falcons will start next year. Other popular schools among Lasallians: the Oregon State University, the University of Oregon, and Clackamas Community College.
So far, members of the Class of 2018 have been offered close to $14.5 million in scholarships. Many have been accepted to college honors programs.
All this confirms what we suspected all along: The future looks bright for this flock of Falcons. Congratulations, Class of 2018!
Published June 14, 2018 Print