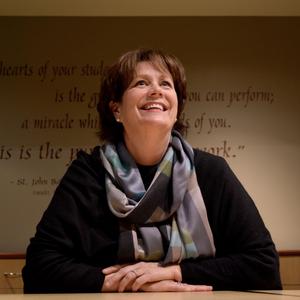 After 15 years at the helm, President Denise L. Jones retires from La Salle Prep
One day, Rory Collins ’18 stayed after school to help set up for an event. As he was moving tables and chairs, one of the school’s administrators happened by.
“Hello, Rory,” she said with a smile. “Thank you for helping.”
As a student leader, Collins had met a lot of La Salle’s bigwigs before.
Still, he was impressed that Denise Leahy Jones – the PRESIDENT of La Salle Prep – knew who he was and went out of her way to talk to him.
“What struck me was seeing how regal she was, exuding a certain air of professionalism,” he said. “I’m taller than she is, but I felt I was looking up to her at the same time.”
The meeting illustrates how Jones led La Salle as the school’s president for 15 years.
She smiled to students and staff in the school hallways. She cheered Falcon athletes from the sidelines. She walked prospective donors through campus. Every Christmas, she and Principal Andrew Kuffner wrote a personal note to each member of the staff.
“It’s important that you let people know that you see them,” said Jones, who retired on June 30. “Everyone counts…everyone has a role and a purpose.”
A critical time
Growing up in a big Catholic family in Southwest Portland, Jones thought her purpose was to be a doctor. She attended St. John Fisher Catholic School, and Wilson High, where she was a dancer, cheerleader, standout student, and force on the speech and debate team. After graduating in 1977, she headed to the University of Oregon to study pre-med.
By the end of her freshman year she had a 3.65 grade point average. Good – but not good enough, she was told – to get into medical school.
So she changed course and schools to pursue nursing. She graduated from the University of Portland and worked her way up from pediatric trauma nurse to management at what is now Randall Children’s Hospital at Legacy Emanuel. She took a few years off to raise her three children, then returned to the workforce where she first raised funds for regional Ronald McDonald Houses, then later sold and marketed luxury cars.
When her older son, Robert, entered La Salle, Jones started volunteering at the school. She was organized and enthusiastic – just the kind of person La Salle needed, thought Greg VanderZanden, who was president of the school at the time.
“She brought an intensity…” said VanderZanden. “She’s not going to let life happen to her. She’s going to go out and get something done. She should’ve been a middle linebacker.”
In 2001, VanderZanden hired Jones as the school’s first foundation director. She worked the phones, met prospective donors, and lobbied for the school’s students.
Jones did so well that when VanderZanden left La Salle to work for the Christian Brothers, he encouraged her to apply for the presidency.
The school was at a critical juncture. Though its leaders had just raised $6 million to build a science wing and library, the 1960s-era campus was showing its age. The stadium’s grandstand creaked so much no one dared sit on it. Some classrooms were so cold that students kept their coats on all day.
At the time, most of the world’s approximately 1,000 Lasallian schools were led by academics who had worked their way up from the classroom. Nearly every Lasallian school on the West Coast had a Christian Brother at the helm.
In contrast, Jones was a woman whose background centered around clinical nursing, hospital administration, nonprofits, and marketing. She'd never even been a classroom teacher.
But Jones loved La Salle, believed in its mission, and wanted as many students as possible to experience its transformative education.
Jones’ passion and faith came through during her interview for the job, said former La Salle Board of Trustee Joe Feltz ’72, who remembers the afternoon Jones breezed into a meeting room, looked in the eyes of everyone on the hiring panel, and shared her vision.
“After she left everyone looked at each other and said ‘WOW,’” he said. “She kind of blew us away.”
In 2003, Jones became La Salle’s third president.

La Salle 101
Aware that she was new to academia, Jones took herself to school.
She read education periodicals, boned up on teaching methods, and studied pedagogy. She talked to administrators and teachers, and occasionally sat in on classes, watching Lasallian educators at work.
“She sits and smiles” during her visits, said Lisa Moran, chair of the World Languages Department. “You feel that affirmation that ‘I must be doing something right.’”
The more time she spent at La Salle, the more Jones noticed the similarities between education and nursing.
“You are presented with symptoms and data and you have to figure it out and you have to do it fast,” she said. “You’re thinking quickly on your feet to come up with a solution.”
She also was quickly learning how La Salle looked to everyone else.
As one of the younger Catholic schools in the Portland area, La Salle was lesser known, and in some quarters, not considered as academically rigorous as its counterparts.
So Jones set out to polish La Salle’s image, boost its reputation, and increase its enrollment – all while making it more accessible.
“She recognized what La Salle could and would be,” said Father William Beauchamp, a former president of the University of Portland and a former member of La Salle’s Board of Trustees. “She wasn’t afraid to challenge things if she thought there was a better way to make it a better high school.”
Jones embraced the Trustees' proposal to change the school’s name from La Salle High School to La Salle Catholic College Preparatory. She wanted the name to reflect that La Salle was both Catholic and a place that prepared them for the world.
She invested in the staff by embedding on-campus professional development and training days into the workweek.
She built community by building everyone up. She turned donuts-and-coffee faculty meetings into networking breakfasts where staff could mingle and exchange ideas. She rooted for students performing in school plays and playing soccer. She shared books with fellow administrators (most recently “Multipliers,” Liz Wiseman’s book on leadership), handwrote notes to teachers, and publicly praised individuals during meetings.
“No matter who you were…she made sure you were seen,” said Andrea Burns ‘97, vice president of La Salle’s foundation and major gifts.
Jones tackled economic challenges too. A short time into her term, the recession hit, threatening private schools all over the country.
But Jones and La Salle defied the odds. At a time when many Catholic schools struggled,
La Salle grew. During her tenure, the school got a new track and field, a new chapel, a new fitness center, a new entrance, and a grandstand everyone could sit on without worry.
That was in large part, Jones said, because of Chief Financial Officer Matthew Winningham, whom she credits for managing the school’s budget and developing the financial aid system that helps more students than ever.
Today La Salle annually educates 700 students, 18 percent more than when Jones started. Over that same period, the number of students receiving financial assistance grew from 114 to 399, and total aid rose from $371,320 to $2.3 million.
But not everyone felt seen and heard.

A letter and a vow
In the spring of 2008, La Salle’s leaders received a letter from a couple in Vancouver, Wash. Their son had not been accepted to La Salle because he had learning disabilities. They wondered why an institution dedicated to forming the “whole child” would deny a student because of his struggles in the classroom.
Is academic prowess, they asked, “a prerequisite for Christian witnessing and service to others?”
Jones knew she didn't have a good answer. But she knew what she had to do.
“We can’t wait for someone else to do it,” she told her staff.
“If we wait until it’s perfect, we’re never going to do it and we’ll be leaving students behind.”
A little more than three years later, La Salle opened Signum Fidei (Signs of Faith), a pathway that students with learning challenges could follow. Seven freshmen enrolled that year.
“She was intent on bringing all kinds of kids into that school,” said former La Salle principal Tom Dudley, who also championed the program. “Everyone belongs.”
“It’s the right thing to do”
In addition to promoting Signum Fidei, Jones and the faculty launched a Science, Technology, Engineering and Math program. They strengthened La Salle’s AP and college prep offerings, and turned La Salle into a school where every student learned via iPads as well as books.
On Jones’ watch, La Salle expanded its school’s faith and service activities, giving students more opportunities to travel near and far to live out the Lasallian principles of respecting all others, showing faith in the presence of God, and reaching out to the poor.
As the public face of La Salle, Jones shared the story of the school and its patron saint at community and business meetings. She cemented relationships with donors such as Precision Castparts Corp., which pledged four-year scholarships to select graduates. In 2012 she secured the largest donation in the school’s history: $2.5 million from an Oregon philanthropist.
“A lot of people have good vision but don’t have good implementation, and a lot of people have good implementation but no vision,” said Al Burns ‘73, a former member of La Salle’s Board of Trustees. “Denise has both.”
Even Brother Alvaro Rodríguez Echeverría, the 26th Superior General of the Institute of the Brothers of the Christian Schools in Rome, took notice of Jones’ presidency. During a visit to the U.S. in 2011, he made a point of visiting La Salle “to meet this woman president I have heard about.”
Though known to give a speech so powerful it could blow their hair back, Jones also went to bat for Lasallians behind the scenes. She once called the president of the University of Portland to make a case for a student who needed financial aid. When staffers brought their babies to visit, Jones went into nurse mode and checked each infant from stem to stern.
“She has a willingness to take care of people because it’s the right thing to do,” said Principal Andrew Kuffner.
When things went well, Jones named those who made those things happen so everyone could see those who contributed to the success.
When things didn’t go well, say those closest to her, she looked in the mirror and wondered how to do better.
Jones’ last day as La Salle’s president was on June 30, 2018. She said she’ll spend the next year doting on her grandchildren, traveling with her husband, spending time with her father, and contemplating where she’ll go next.
VanderZanden, who saw Jones' potential nearly 20 years ago, believes she’ll land just where she’s supposed to be.
“I think a lot of it is providence,” he said. “God has a way of putting people where they are, and he gave us Denise.”