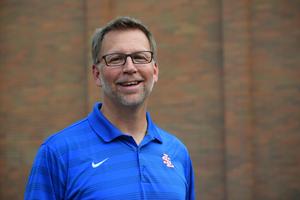 Mike McCaffrey has stepped up to serve as the new president of La Salle’s Booster Club.

Mike, the husband of La Salle event support specialist Melanie Vila McCaffrey ’95, and the father of Mia ‘22, and Christ the King 7th-grader Eva and 4th-grader Ben, grew up on the East Coast and attended East Catholic High School and Providence College in Rhode Island.  He was commissioned an officer in the U.S. Army in 1989, and served in Korea, North Carolina, and Kuwait.

After leaving the military, Mike focused on supply chain management, working for companies such as Ryder and Apple. Today he works as an Associate Vice President of Logistics/Supply Chain at Oregon Health and Sciences University.

Mike is a seasoned community volunteer and has coached local and Catholic Youth Organization sports as well as led Christ the King’s school advisory board. In his spare time, he skis and plays volleyball.

Mike said he is honored to lead the Booster Club, which supports La Salle athletics and clubs, and stages events such as the Steak and Seafood fundraiser in February, and the free Red and Blue back-to-school BBQ at 5 pm on Wed., Aug. 22, near the stadium.

“I am excited to serve the La Salle community in this way," he said.

Joining the Boosters "is a great way to support our students by helping provide them with more opportunities and improved equipment,” he added. “Plus, it’s a great way to get to know other La Salle families.”

Mike inherits the club's reins from alum and fellow La Salle parent Patrick Gabrish '84, who Mike praised for his skill and service to the school.