Hortsch to be honored as Lasallian Educator of Year 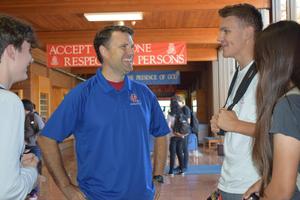 Director of faith will be feted for living La Salle's ideas during annual Heroic Vow assembly on Nov. 14

Gary Hortsch, a religious studies teacher and La Salle’s director of faith, will be honored as this year’s Lasallian Educator of the Year during the school's Heroic Vow assembly on Wednesday, Nov. 14.

“Gary embodies every aspect of our banners and the wider charism of Lasallian education,” wrote a colleague in nominating Hortsch for the honor. “Gary leads with example as well as kind and supportive words, whether as teacher, coach, department chair, or campus minister.”

Hortsch is in his 13th year at La Salle, his ninth as director of faith.

“Given this is a place I love so much, it’s an honor to be named Lasallian Educator of the Year,” said Hortsch. “I recognize that it’s all of us doing good work together.”

The Lasallian Educator of the Year Award honors an educator who exemplifies the ideals of St. John Baptist de La Salle in the 21st century, both pedagogically and spiritually. Each year La Salle’s staff votes for one among themselves to receive the award.

In addition to teaching, Hortsch is the force behind many of La Salle's student spiritual development experiences such as Journey. He's also known for adding special touches to school celebrations. During La Salle's 2017 Holy Thursday service, for example, he washed several students’ feet as a symbolic gesture of Jesus' commandment to love and serve one another. For the school’s 50th anniversary, he arranged students and staffers on the football field in the shape of a number “50.”

“Gary, like La Salle himself, is fearless in living the mission and keeps his eye on the mission of Lasallian education in all of his endeavors,” said the nominator. “Just stop and think for a second how different (how much “less”) La Salle would be if he was not here. We would certainly all be less Lasallian by his absence. And isn’t the true definition of an excellent Lasallian educator -- one who makes others they touch even more Lasallian?”