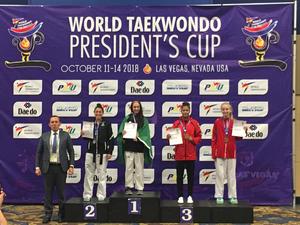 As the top American in her division, she won a wildcard entry to the 2019 Pan Am Junior Championships in Lima, Peru.

Lauren has been practicing taekwondo, a Korean martial art, since she was 11 years old.

She also played soccer for many years -- including on La Salle’s JV team last year -- but gave up the game to focus on taekwondo.

"This tournament was my first real indication that I made the right decision," she said.

These days Lauren trains seven days a week. She does most of her workouts at Top Notch Taekwondo in Clackamas with her coach Shon McClements. Sometimes she'll train with teams in Washington.

Despite often breaking her fingers and toes, Lauren said she enjoys competitive taekwondo.

"I like the adrenaline rush," she said. "I have made friends all around the world."

Plus, she said, "I like that you get out of it exactly what you put into it...if you put in the work, you know you are going to get the results."